Once upon a time, computer games couldn’t hide behind fancy graphics – because fancy computer graphics hadn’t been invented. A game lived or died by its gameplay – which is why so many of those old computer games are still being re-made or used as inspiration for today’s big budget titles.

And it’s the reason why this retro handheld console from Logic3 will probably make a lot of overgrown teenagers very happy.

Looking like a cross between a brand new Sony PSP and the long-forgotten Sega Game Gear, the GamesPower 50 has 50 – yes 50 – games pre-loaded onto it. Copyright probably stops the use of the old games directly, but you can play games styled in the 80s involving (for example) driving, archery, racing, darts, pool, warfare or quizzes that’ll have you hooked for hours or until you strain your eyes staring at the 2.5 inch screen. In fact, when they do ache, you can actually plug the handheld into a large TV and carry on there.

Available in either red or blue and powered by three AAA batteries, you can pick the GamesPower 50 up for around £40.

Find out more about the GamesPower 50

Stephenson Satchel Bag for laptops and iPad by Proporta 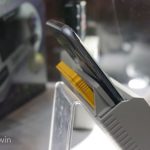