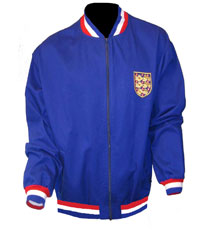 In case you’ve been living like a hermit for the last 4 months, you’ll probably be aware that England have qualified for the World Cup finals, where they’ll do ok, get knocked out 2 games too early, then hold the referee responsible for their failings.

But until that happens, expect Umbro to do the hard sell on the official kit and supermarkets, garages and cornershops to do their best with an assortment of St George’s tat.

It doesn’t have to be this way. You can look cool and still show your support. Check out this 1966 jacket, re-created by Toffs. Originally seen on that style icon Sir Alf Ramsey, it was a garment of the era and still has an edge today. Personally I’d have preferred the 70s version with the team name on the back – but they don’t make that one (yet).

Anyway, you can order one of the ’66 jackets now for around £45, with delivery in May, giving you plenty of time to break it in before the finals.