It’s impossible to overstate the importance of Factory Records to both Manchester and the UK music scene through the 80s, 90s and arguably still to this day. It’s the label that almost singlehandedly made Manchester "cool".

Between 1978 and 1992, Factory was one of the most important record labels in Britain. It launched the careers of Joy Division, New Order and the Happy Mondays, to name but a few; it opened the legendary Haçienda club and it introduced high-quality, cutting-edge design to the masses. The visuals developed alongside the music, by designers such as Peter Saville, Central Station Design and 8vo, are still recognised and imitated today.

Factory Records:The Complete Graphic Album, compiled Matthew Robertson and with a foreward by Tony Wilson, looks to be the definitive guide to the label. The book is effecively a chronological catalogue of the label – every item with one of the famous Factory inventory numbers is illustrated or listed, including album sleeves, singles, special editions, flyers, posters, stationery and architectural projects.

For anyone interested in design, the Manchester music scene or if (like me) you just want to wallow in a bit of nostalgia, the book looks pretty much essential. 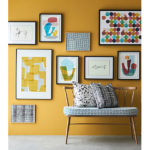