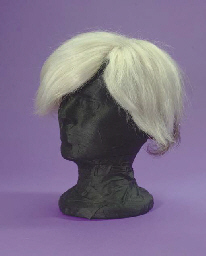 No, it’s no joke, at the forthcoming entertainment memorabilia auction in New York, a large Warhol collection up for grabs includes Andy Warhol’s wig – shown here and dated from around 1980.

This trademark silver and dark grey rug with three strips of toupée tape was one of his more elaborate creations – originally he used wigs to cover up his baldness, but by this time, they’d become more of a fashion accessory.

If you want to keep your head warm with a Warhol creation, you’ll have to bid between 4,000 and 6,000 U.S. dollars. If you want something cheaper, there’s lots of other Warhol items, plus many other pieces of entertainment memorabilia.

The auction takes place on June 22nd in New York.

One thought on “Bid for Andy Warhol’s wig”