Ok, it isn’t an Aston Martin, but if you want to get your hands on a genuine Bond motor, here’s a chance to buy the Lotus driven by Roger Moore are James Bond in For Your Eyes Only.

It’s a Lotus Esprit Turbo, a prototype of the one that went into production, so is a sought-after item for both Lotus and Bond collectors. As such, it might be as well to check the bank balance before bidding, with an estimate of between $250,000 and $350,000 quoted.

It’s just one item in a Bond auction that also includes Odd Job’s Weapon Hat from Goldfinger, Odd Job’s ring, along with items from Moonraker and the recent Pierce Brosnan movies. Again, don’t expect a bargain – the hat should make between $20,000 and $30,000.

The auction will be held at Planet Hollywood in New York, but will run for a full day on Saturday June 17th, with bids also being taken online via Julien’s Auctions. 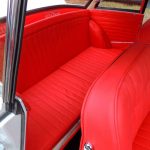 One thought on “Bid for Bond’s Lotus Esprit Turbo”