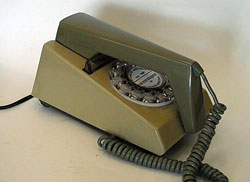 In an age when all phones were more or less standard in looks (and had been for some time), the Trimphone must have been quite a talking point when it entered homes in the mid 60s.

Designed in 1966 for the old GPO by Martin Rowlands, this is the phone that eventually screamed the 1970s. It was the first to use – and became famous for – the much imitated electronic ringer and was available originally with a dial, then later with push buttons.

I was once told by a BT engineer that there was a huge stockpile of these at BT – but they all got destroyed in a big clearout. However, you can still pick them up easily enough. The original dial version is available from Telephone Lines for £34 in a variety of colours, with a push button model for sale at £24.

But be warned, like all these phones, they don’t have the functionality of modern phones, so be wary of using one anytime a hash key is required.

One thought on “The Trimphone”