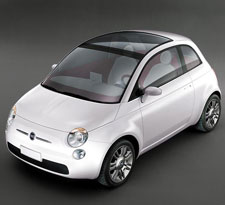 Fiat is re-introducing the legendary Fiat 500 next year – and the company wants you to add the finishing touches.

You might well have seen the prototype version – the Trepiuno (pictured), which was unveiled at the 2004 Geneva Motor Show. The actual version, which goes on sale in 2007, will actually be a joint partnership with Ford (which will use the car as a replacement for its Ka), but with input from the general public via Fiat’s website – and if they use your idea, they’ll pay you for it.

Some ideas – including a small Italian flag on the bodywork and a chrome exhaust – have already been accepted, but it’s not too late to get your idea featured. One thing to remember though – Fiat want it as close to the original as possible – so don’t go too OTT!