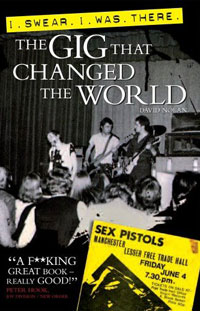 The modern-day Manchester music scene didn’t start with Oasis, or the Stone Roses, or the Smiths, or New Order, or Joy Division or indeed, the Buzzcocks. It effectively started on June 4th 1976, when the Sex Pistols took to the stage at the Lesser Free Trade Hall.

In the audience that night were future members of Joy Division and New Order, the Smiths, the Fall and Buzzcocks and Tony Wilson, the prime mover behind Factory records, the Hacienda and much more of what Manchester is today.

The gig has become legendary and been described as one of the most pivotal gigs of all time. The truth behind the gig, the Pistols repeat performance six weeks later and their first ever TV appearance (on Granada – and hosted by Wilson) is now available in a book called I Swear I Was There by David Nolan.

Featuring previously unpublished photos, interviews with key players and audience members – if you have an Sex Pistols, punk rock, or the birth of the Manchester music scene, it’s well worth picking up.

Furniture & Interiors of the 1960s by Anne Bony

The Art of Dating: Wisdom from the 1940s