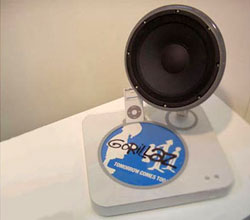 This caught our eye – mainly because of how strange it looks – a cross between an old time gramaphone and a record deck playing a 12-inch vinyl picture disc. It is in fact the I-Deck, an invention by British designer Michael Kennedy (who we can’t find much about – if you’re out there, get in touch).

It’s not just about looks – it’s actually a rather clever piece of kit. Essentially it’s just another dock (speaker system) for your iPod, but with a heavy emphasis on the sleeve art – neglected in the digital age. Plug your iPod into your I-Deck and the album art is displayed on the touchscreen LCD screen like a large record. The screen also serves as the control for your iPod – flick the screen to skip a track, fast forward by spinning the screen. And to play – just turn it.

I get the feeling this is a prototype, with price and availability details pretty scarce. But if you know anymore, let us know. And put us down for one.

Via The Cool Hunter 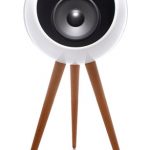 One thought on “I-Deck – iPod becomes a record deck”