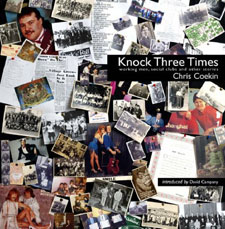 As a born and bred northerner, I grew up with the entire family spending large amounts of their time in the local social club – and even managed to sneak in there myself now and again as a kid, amazed by the bad cabaret acts, black pudding suppers and enormous beer guts.

All of that and more is described in detail in a new book (not by me I hasten to add) called Knock Three Times – Working Men, Social Clubs and Other Stories by Chris Coekin.

Like me, Chris Coekin visited clubs with his parents – but in his case in the city of Leicester. "Knock Three Times" is set in the Acomb WMC York, which Chris first photographed in 1996. Through photographs and archive material, Coekin explores the cultural roots and identity of the Working Men’s Club.

It all sounds academic, but it isn’t – it’s an engaging book that’s bound to raise a smile for anyone who was dragged along to see the the never-ending stream of brickies-turned-crooners dressed in velvet jacket, frilly shirt and bow tie, murdering classics and pop tunes of the day.

You’ll miss them when they’ve gone.

One thought on “Life in the social clubs”