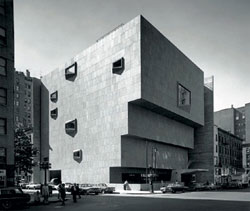 Marking the 25th anniversary of the death of one of the most influential designer-architects of the 20th Century, The Lighthouse in Glasgow is hosting the only UK showing of Marcel Breuer – Design and Architecture.

Born in Hungary in 1902 Breuer first made his reputation as a young designer working at the Bauhaus in the 1920s. At the tender age of 23 he invented what was to become one of the most important innovations in furniture design – tubular steel – and his creations, which included some of the first cantilevered chairs, have become design classics.

After a short period in England in the 1930s Breuer headed for New York where his career as an architect took off, designing iconic public buildings such as the Whitney Museum of Modern Art, New York and the Unesco Head Quarters in Paris.

The exhibition, which runs from 15th June to 27th August 2006, features many examples of furniture designed by Breuer at the Bauhaus and detailed 3-D models of 12 of his keynote buildings designed during his time in the USA.