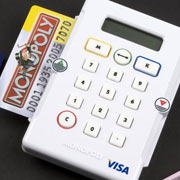 There’s something reassuringly old-fashioned about Monopoly – with its small rents, top hats and beauty contests – but all that could be about to change, as the classic board game trades in its piles of cash for debit cards.

Your mock card is inserted into an electronic machine where the banker taps in cardholders’ earnings and payments. Maker’s Parker claim they’re just moving with the times. Spokesman Chris Weatherhead said: "The new electronic Monopoly reflects the changing nature of society and the advancement of technology."

The new game is part of an international deal between Parker and finance giant Visa, which designed the mock debit card and its electronic machine. The cost of which is passed onto the buyer – with the new version costing around £25.

But fear not fellow traditionalist, you can still pick up an original cash-based version at a far more reasonable £13.

Vinyl puzzle from Bob’s Your Uncle

Kewpie Doll from Lapin and Me