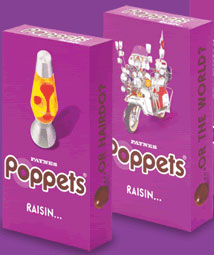 I’m not sure if I have fond memories of Poppets – they were usually found in the racks of cinema foyers, overpriced and never as good as a bag of Revels. But they obviously made a mark on some people, as demand has forced their return – in suitably retro packaging.

Yes, the boxed sweets are back in the shops in four flavours – toffee, mint, raisin and orange – and the boxes feature what the company describe as "iconic images". 16 in total – some are extremely naff – Rubik’s Cubes, lava lamps and the Natwest piggy banks for example – but you can’t beat a box of sweets with a Lambretta scooter or a Mini on it.

You should find them in most retails outlets and supermarkets in the UK, priced around 35p per carton.

2 thoughts on “Poppets reissued with a retro look”