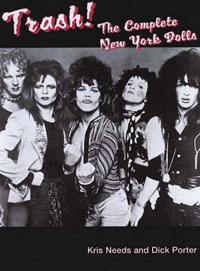 I first encountered the New York Dolls via an older brother’s double LP, years after the band had self-destructed. The mix of Rolling Stones attitude and punk anarchy (years before punk happened) made its mark – as did the wild looks and outrageous outfits. Seeing them live last year was certainly entertaining, but a poor substitute you’d imagine for the band in their heyday.

The story of the band’s heyday – and what happened to the members subsequently – is now available in a new book called Trash! The Complete New York Dolls by Kris Needs and Dick Porter.

It covers everything you need to know about Morrissey’s favourite band (he ran the fan club in the UK in his formative years and was behind the band’s recent reformation), the extremes and the outrages – and their descent, mainly down to the heroin problem that plagued the band.

Read this – then buy the New York Doll DVD (out next month) for the story of Arthur "Killer" Kane’s return to the band from the Mormon church. You can’t make it up.

Max and the Lost Note by Graham Marsh