Top toy manufacturer Corgi is 50 this year – and to mark the occasion, the company has compiled a chart of its bestselling replica cars – some you’d expect – and a couple that might surprise you. However, there’s no surprise about the first place, which is…

Over 4,907,000 of the Batmobile have been sold worldwide. It featured a three stage rocket firing mechanism, a tyre slasher blade at the front of the Batmobile, and scorching flames that are flicked in and out of the turbine exhaust as the car rolls along. You don’t get that on a Ford Focus.

Produced in 1979, this iconic Formula One model had a simplistic colour scheme of black and gold and featured gold-plated parts including the exhaust, engine, mirrors, suspension members and wheel hubs. 2,027,000 sold worldwide.

Not really up there with the others for style, the Ghia L 6.4 was a big thing in 1963 – because it was the first ever diecast model to have ‘the works’ (opening bonnet, boot and doors, tip-up seats, jewelled headlights, plated parts and detailed engine). It even featured a little moulded Corgi dog lying on the rear parcel shelf. It was enough to sell 1,753,000 models.

No really. Had no big selling points, but obviously kids of the day wanted a car like their dad. An astounding 1,667,000 sold worldwide! 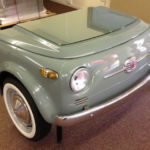