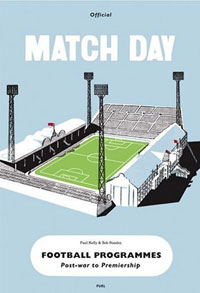 In these days of football as big business, it’s hard to recall those pre-satellite days, when footie was an altogether more naive affair of terraces, one-club players, £5 or less admission on the gate and finance generated from local advertisers, not multinational corporations. And it’s this era that’s inspired Match Day: Official Football Programmes by Paul Kelly and Saint Etienne’s Bob Stanley.

As the title suggests, it’s a collection of covers of official UK football programmes from every league club from post-war to the start of the Premiership, or what’s commonly known as "the golden age of British football". It’s also trip through graphic design throughout the years, not to mention nostalgia for a bygone era.

If you still hark back to the days of "proper football" (boutique-owning players, bad hair and Bovril), then this has got to be one for the Christmas list. out now and retailing for around £20.

What We Wore: A People’s History of British Style by Nina Manandhar