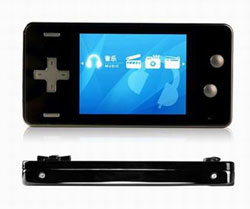 You probably know that the latest iPods can download a couple of retro games (including PacMan and Tetris), but it’s not alone in offering old school gaming – there’s also this Odna VX737 media player.

Whether they dare risk releasing it outside of China is debatable – I’m guessing Nintendo would sue immediately if they found out it contained faithful reproductions of 8 Nintendo NES titles – with more available to download.

In addition, it’s also an MP3 player and a video player, good for the majority of typically found formats and watchable on a 2.5-inch screen, with storage of 512MB for music and video. If you own a Sony PSP, you’ll already be familiar with the menu system – so that’s another huge Japanese corporation ready to sue.

It could sneak in as an imported machine, or you might find one on a trip to the far east. Either way, keep a note of the name if you want some Nintendo classics in your pocket.

Levis-styled mobile phone on its way