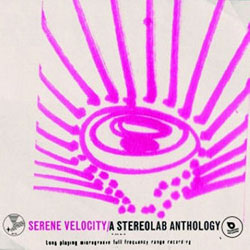 At last, an anthology of one of Britain’s most hip – and at the same time still relatively unknown bands is in the shops in the shape of Serene Velocity – a Stereolab Anthology.

Describing Stereolab is near impossible – a mix of French pop, experimental sounds of the late 60s and early 70s and good old British indie. This album is designed as an introduction to the band, compiling the more accessible tracks from the band’s Elektra years for those who are overwhelmed by the huge back catalogue available.

The anthology will be available on CD, vinyl (limited to 750 numbered pieces) and as a digital download, the latter of which includes an exclusive interview with band mainstays Tim Gane and Laetitia Sadier about the collection. And just to make it a worthwhile purchase for fans, all the tracks have been reworked at Abbey Road Studios by Gane.

16 tracks and an absolute bargain at £7.99. It’s available from Monday 4th September.

Cool Yule: Phil Spector – A Christmas Gift For You