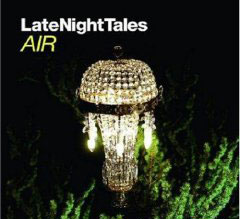 In truth, I’m a bit bored of these "let’s go back to my house and hear some records" compilations that too often trade on the back of a band’s name, but I’m making an exception for Late Night Tales by Air.

The premise is just the same – post-club tracks to bring yourself down after a night on the town. Where this one differs is the sheer variety and general quirkiness of the tracks selected. Yes, there’s a couple of things you might expect, like Scott Walker, Lee Hazlewood and Minnie Riperton’s "Lovin’ You", but the majority leans towards the unexpected and the (relatively) unknown.

The album kicks off with Black Sabbath and The Cure – but not as you’d expect. Check out also Nino Rota’s O’ Venezia Venaga Venusia (pulled from a Fellini movie), Georges Delerue’s Camille (another soundtrack piece from the early 60s) and more contemporary cuts like Cat Power’s haunting Metal Heart and Elliot Smith’s Let’s Get Lost. There’s even some classical to close with The Cleveland Orchestra doing Ravel.

Yes, it’s another of those mix albums – but you get the feeling this one had a lot more thought put into it than most.