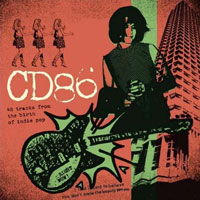 Where did indie begin? Well, according to many people (including St Etienne’s Bob Stanley), it started with the C86 tape. C86 was a follow-up to a Rough Trade collection in 1981, called unsurprisingly, C81. The later tape was compiled by NME writers of the time in conjunction with Rough Trade and was designed to reflect emerging bands of the era.

Over time, C86 became associated with the DIY indie ethic of jangling guitars, catchy pop, bedroom fanzines and small labels – shifting from tape to genre – a sound that dominated indie probably until the start of Britpop.

Well, 20 years on and a new CD celebrates that album and that era. CD86 isn’t a copy of the original tape, it’s more "in the spirit of…" Some tracks survive, include Primal Scream’s Velocity Girl, The Wedding Present’s This Boy Can Wait and The Bodines’ fantastic Therese, but many are just indie tracks from between 1986 and 1989 – some good, some bad, but still great value with 48 tracks for less than a tenner.

Not essential, but a solid album and a reminder of when indie really was independent.