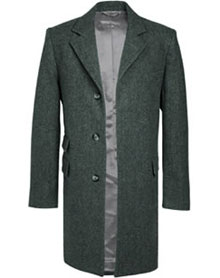 French Connection (or FCUK as they seem to be called these days) have been on a steady decline to a lowest common denominator for a few years now, hitting rock bottom with those appalling FCUK you t-shirts. After that, there’s only one way to go.

While most of their range still isn’t worth a look, they’ve got a couple of decent winter coats, including this Andrews overcoat. It’s a herringbone wool mix, fully lined and described as tailored (which probably means fitted), single breasted with concealed button placket, front and inner pockets and back vent.