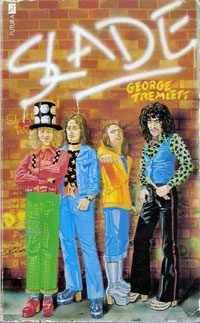 "In a few years’ time, we may all be saying that Slade are the most important rock group to have emerged since The Beatles."

So begins our latest junkshop gem, Slade by George Tremlett. George, it would seem, is (or was) an old-school music journalist and member of the Greater London Council. His book on Slade was written at the band’s peak and written in conjunction with the band prior to their appearance in their first (and only) feature film, Flame.

George’s adulation of Slade seems laughable now, with the band now just seen as a novelty Christmas act (if they’re remembered at all), but in 1975, Slade really were huge – 20,000 fan club members (says the book), chart-topping regulars and a big screen debut in the pipeline. And that’s why this book is so good – as well as telling you all you’ll ever need to know about the band, including an exhaustive history (with photos and a list of every gig played)  – it’s a piece of history from a long-gone era – when four ordinary lads with bad hair and platform shoes ruled the pop world in the pre-punk years. And yes, life seemed just like the Reeves and Mortimer spoof, "Slade at home".

Pay no more than £3 – but worth every penny.

Portobello Road: Photographed in the Sixties by John Petty