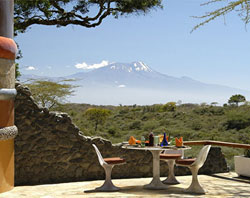 I can’t resist some faded glamour – but all the better when its sat in a stunning setting, as is the case with Hitari Lodge in Tanzania.

If you’ve heard the name before, it’s probably because of the film Hitari, starring John Wayne, which was set at the Lodge, situated overlooking Mount Meru and Kilimanjaro. One of the film’s stars, Hardy Kruger, later bought the place, but it’s now run as a very retro safari lodge, with eight rooms, all with open fireplaces and en-suite bathrooms – and all still decorated with the look of the early 60s.

The lodge is a one-hour drive from Kilimanjaro International Airport (KIA), with daily flights from Europe. Rates aren’t clear, but seem to be about £147 per person for full board.

An Alphabet of London by Christopher Brown