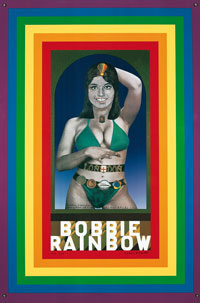 We love Peter Blake here at Retro To Go, one of the pioneering pop artists of the 60s, and living icon, and after watching the South Bank show on him the other week, we thought it was the ideal time to feature Bobbie Rainbow.

Peter Blake may be better known to some of you for designing the Beatles Sgt Pepper cover and more recently Paul Weller’s Stanley Road and the new Oasis greatest hits album artwork. However one of his most well known art images from the 60s was Babe Rainbow. In 1967 he was commissioned by Dodo Designs to produce an enamel plaque that was issued in an edition of 10,000, which sold for £1. It brought his art to the masses, designed to be affordable. Babe was a fictional lady wrestler, one of a series that have featured in Blake’s work.

Her fictional daughter, Bobbie Rainbow, was produced by Blake for the Pallant House Gallery in 2001. A signed and numbered lithograph on tin, (66cm x 44cm) from an edition of 2000, and priced at £300 plus £15 for postage, it would be a great gift for anyone into pop art or would like to own their own Peter Blake piece.

The Cockney Alphabet by Paul Bommer