We featured Karim Rashid’s bargain Ronson space-age Spindle lighters earlier in the week, but here’s something from the other end of the spectrum – the Ronson 50th Anniversary Varaflame lighter.

The Varaflame is a classic, first appearing in the 50s and one of the first gas and variable flame lighters. It’s sleek modernist looks made it an essential accessory of the day for movie stars, celebrities and magazine shoots – and it’s still eye-catching in today’s less smoker-friendly climate.

This gold anniversary Varaflame should be in the shops next month – price yet to be announced. 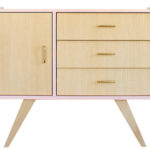