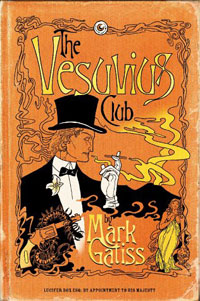 As a League of Gentlemen fan, I can’t believe The Vesuvius Club by Mark Gatiss passed me by on its release. But a year later, I’ve finally managed to pick up and read a copy – and I’m glad I did.

It’s probably best described as a James Bond from the Edwardian era – although Bond doesn’t behave as badly as Lucifer Box, described as a "portrait painter, wit, dandy and rake". But that’s all a cover for his main occupation – as a government agent and state-sponsored killer.

Box is called upon to look into the mysterious disappearance (and suspected murders) of two of the country’s leading scientists . His search takes him to Naples – and into a secret (and sordid) society – the Vesuvius Club, which seems to hold the key to the mystery. A real page-turner, occasionally shocking, but a fantastic plot that might get a little confusing at times, but is well worth the extra effort. Some fantastic gothic-style illustrations too.

You can pick it up now from Amazon for around £6.