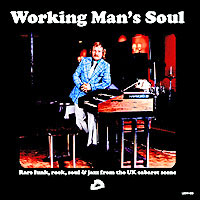 If you’re after something a little different from your usual listening, Licorice Soul might have just the thing – Working Man’s Soul – a collection of recordings made by British cabaret performers during the 60s and 70s.

The selection on the album covers everything from soul, funk and jazz to rock and easy listening. And sometimes all of those in one track. Most of these tracks were only made available on privately pressed records and sold in tiny quantities during live performances at British social and working men’s clubs. Some of the acts featured got a touch of fame, most kept their day jobs to pay the bills. But now they’re finally getting the attention their efforts deserved.

If you want to know more, check out the Licorice Soul website, where there’s also MP3 samples of some of the tracks. The 18-track CD is released on 4th December, priced at £10.