Starting on 31st March at Manchester’s Lowry is Ian Berry: In The North – an exhibition of images taken by Magnum international Photojournalist Ian Berry in the North of England throughout the 1970s.

The photographer had already made his name before taking the images of his native Lancashire – with assignments starting in South Africa, before documenting the Russian invasion of Czechoslavakia, along with conflicts in Israel, Vietnam, Zaire and Ethiopia.

Berry’s work here is far more gentle –  capturing street scenes and life from all over the region, ranging from children playing on a rubbish tip and old men in the street to a woman sweeping a "Coronation Street" style road and a couple dancing in a pub. And fittingly, it will be rubbing shoulders with the work of Lowry – who captured similar images some years before.

If you want to take in the exhibition,  it runs from 31st March to 10th June. 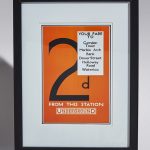