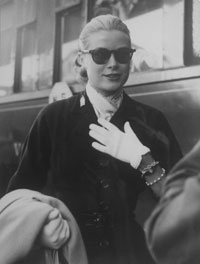 If you know the name Edward Quinn, it’s probably through his celebrity snaps from exotic locations such as the French Riviera in the 1950s. And if you don’t know him, you can find out more at Edward Quinn – A Day’s Work at the Michael Hoppen Gallery in London.

As you would expect, it’s full of iconic images of the day, typified by this image of Grace Kelly arriving at Cannes train station in 1955. But that’s not all – there’s also examples of Quinn’s documentary work, along with later portraits of artists, writers and politicians.

It kicks off from Thursday and runs until 17th June 2007.

Find out more at the Michael Hoppen Gallery website