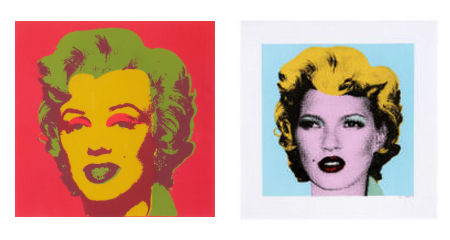 Another chance to see some of Warhol’s art – this time it is in London and there is a modern twist. Warhol vs Banksy at the Hospital Gallery brings together for a head-to-head clash, two of the most popular/controversial artists of their respective generations.

The show looks to examine the similarities in both aesthetic and content between the two artists, in particular their interest in celebrity culture. The show includes Banksy’s portrait of Kate Moss in the style of the Warhol’s Marilyn, hung opposite the 1963 original, as well as both artists’ portraits of the Queen. Other highlights of the show are the first UK showing of Warhol’s four drawings of The Beatles, and Banksy’s massive Winston Churchill painting with green Mohawk, only shown once before in the UK.

Blow-Up movie print by The Scene