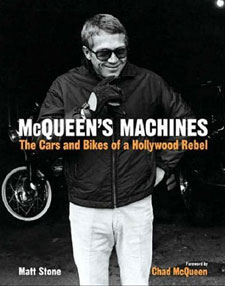 It’s stating the obvious somewhat to say that Steve McQueen had an interest in cars and bikes – it was probably more of an obsession. And now you can share that obsession with McQueen’s Machines: The Cars and Bikes of a Hollywood Legend.

Journalist Matt Stone was given access to the McQueen family albums to create this 176-page hardback book, packing each page with images of vehicles driven, owned, and raced by Steve McQueen. And to give it continuity, there’s plenty of facts too – including his obsession with Triumph motorbikes (James Dean introduced them to him apparently), the disappointing news that he didn’t do the motorcycle jump in the Great Escape and the ever-increasing value of his vehicles – his 1963 Ferrari Lusso, which sold last summer for a massive $2.3 million.

This book is available for a more modest price – £10.19 from Amazon.

The History Of The NME

Film Posters of the 60s by Tony Nourmand