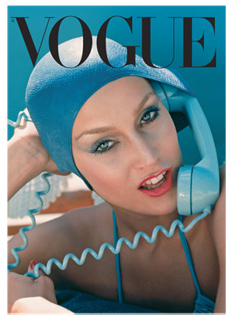 Old magazine covers, especially those from the high fashion publications, were often much more than just a pretty design – they were works of art. Vogue has recognised this fact and now you are able to buy a selection of Vogue Cover Canvases.

The small range currently available comprises of five of their best ever covers, each one featuring a striking image by a leading photographer of the era. Three of the covers are images by Norman Parkinson, a revolutionary photographer who pioneered taking models out of the static studio environment.

Pictured here is his 1975 cover, which also has the distinction of being Jerry Hall’s first cover for British Vogue. His other photographs have a similar use of saturated colour. 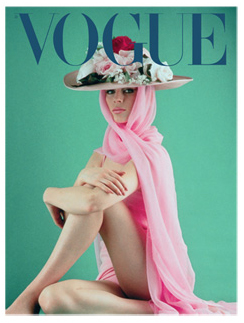 Covers by American photographers Claude Virgin and Ronald Traeger (best known for his photos of Twiggy on a mini motorbike) complete the series. Noticeably these classic images come from between 1956 and 1975 and somehow I don’t see covers from more recent years ever having the same legacy.

Canvas cost between £45 and £85 depending on the size, although prints are available at lower prices starting from £15.