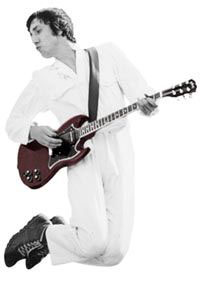 Barry Murphy returns once more trawl the TV and radio guides (so you don’t have to) to find anything worth tuning into this week. All listings are for UK terrestrial TV, Freeview and national radio, with the shows running from Friday 17th October to Thursday 23rd October 2008.

The American jazz guitarist and father of the solid-body electric guitar narrates his own life story in the new documentary Les Paul Chasing Sound (Friday 17th. BBC 4. 9pm) to a soundtrack of his greatest hits.
In the final episode of The Story of the Guitar (Sunday 19th. BBC 1. 10.20pm) Alan Yentob talks to some of the country’s leading guitarists including David Gilmour, Tony Iommi and Pete Townshend, about how the instrument has changed their lives
Finally, this week’s Later… with Jools Holland (Tuesday 21st. BBC 2. 11.20pm) features legendary New Orleans musician, songwriter and producer Allen Toussaint.

The Professionals – ITV 4. 7.00pm – 8.00pm
Bodie and Doyle are pitted against KGB assassins when a CI5 agent is apparently raised from the dead.

Mastermind – BBC 2. 8.00pm – 8.30pm
Stax Records are among the specialist subjects this evening.

Les Paul Chasing Sound – BBC 4. 9.00pm – 10.30pm (Repeated 2.10am)
New. The American jazz guitarist and father of the solid-body electric guitar narrates his own life story, to a soundtrack of his greatest hits.

The Story of the Guitar (2/3) – BBC 4. 11.30pm – 12.30am
Out of the Frying Pan. The guitar turns electric and music is changed forever. Alan Yentob examines the shift in the cultural status of the guitar, from the blues of the Mississippi to the "guitar wars" of the 1950s, when the Fender Stratocaster and the Gibson Les Paul ruled.

All You Need is Love – More4. 12.45am – 1.50am
Tony Palmer’s mammoth documentary series on the birth of pop gets a rare re-run after it’s recent release on DVD. Tonight’s film looks at the story of the Beatles.

The Avengers – BBC 4. 1.20am – 2.10am
The Quick Quick Slow Death. Steed and Emma investigate foul play when a foreign agent is involved in a road accident.

Film: Carry On Emmannuelle (1978) – BBC 2. 12.10am – 1.35am
Awful spoof comedy starring Suzanne Danielle and Kenneth Williams. The French ambassador’s wife seduces her way through London. A real career nadir for everybody involved, this is a truly dreadful end to the classic series.

Film: Vault of Horror (1973) – Film4. 1.10am – 3.30am
Terry-Thomas and Denholm Elliott star in this very enjoyable Amicus anthology horror from director Roy Ward Baker. In a large building, five men get into a lift heading for the ground floor, but instead it takes them to the sub-basement where they find themselves trapped and share visions with each other of their demise.

Soul Music: What a Wonderful World – BBC Radio 4. 3.30pm – 4.00pm
This song was written for Louis Armstrong and recorded by him in America in 1967 amid civil rights demonstrations and protests against the Vietnam war. But was it meant as a powerful anthem to peace?

The Professionals – ITV 4. 6.00pm – 7.00pm
A British spy faces an identity crisis after being released following his capture by the Russians.

Dance Britannia (3/3) – BBC 4. 9.00pm – 10.00pm
From the Northern Soul scene of the 1970s and the rave culture of the 90s, to the Bhangra dance clubs of multi-cultural Britain, the story of British dance styles comes full circle in the final programme, as more traditional forms of dance once again become mainstream.

The Story of the Guitar (3/3) – BBC 1. 10.20pm – 11.20pm
This Time it’s Personal. The electric guitar has unleashed a seemingly inexhaustible sonic invention among guitarists. In the final episode Alan Yentob talks to some of them, including David Gilmour, Tony Iommi and Pete Townshend, about how the instrument has changed their lives.

Les Paul Chasing Sound – BBC 4. 12.30am – 2.00am
New. The American jazz guitarist and father of the solid-body electric guitar narrates his own life story, to a soundtrack of his greatest hits.

Hammer House of Horror – ITV 3. 2.45am – 3.40am
Charlie Boy. A man makes the mistake of scoffing at black magic – and unwittingly places a fatal curse on a group of unfortunates. With Leigh Lawson, Angela Bruce, Marius Goring and David Healy.

Film: Chinatown (1974) – Five. 11.05pm – 1.30am
Oscar-winning thriller starring Jack Nicholson. When a private eye JJ Gittes is hired to investigate the husband of a Los Angeles socialite, he stumbles into a web of deceit and murder and uncovers a secret from the past.

Choo Choo Ch’Boogie: the Louis Jordan Story (3/4) – BBC Radio 2. 11.30pm – 12Midnight
New series. A profile of singer and saxophonist Louis Jordan (1908-75), whose feel-good jump-jive sound (with band Tympany Five) is credited with bridging the gap between the minstrel show and rock ‘n’ roll, between swing and R&B. This edition explores his collaborations with Louis Armstrong, Bing Crosby and Ella Fitzgerald.

British Style Genius (3/5) – BBC 2. 9.00pm – 10.00pm
Breaking the Rules – the Fashion Rebel Look. Clothes that cock a snook prowl down the runway in this look the fashion industry’s celebrated mavericks – designers who not only tear up the rule book but would happily make a model wear it as a hat. Vivienne Westwood, whose designs were born out of the creative chaos of punk, is interviewed, John Galliano talks backstage at his latest Paris show, and Alexander McQueen explains the art of his catwalk shock tactics.

Film: Vault of Horror (1973) – Film4. 2.00am – 3.50am
Terry-Thomas and Denholm Elliott star in this very enjoyable Amicus anthology horror from director Roy Ward Baker. In a large building, five men get into a lift heading for the ground floor, but instead it takes them to the sub-basement where they find themselves trapped and share visions with each other of their demise.

Bond: The South Bank Show – ITV 1. 10.40pm – 11.40pm
The arrival of a new Bond flick always heralds much anticipation, and the latest outing, Quantum of Solace, is due to hit the big screen soon. Melvyn Bragg joins Daniel Craig on set to explore the appeal of the franchise and also talks to 007 stalwarts including Sean Connery and Judi Dench.

Film: The Ipcress File (1965) – ITV 4. 11.00pm – 1.10am
Spy thriller starring Michael Caine. Intelligence agent Harry Palmer is plunged into the world of counter espionage as he uncovers a bizarre "brain drain" among scientists.

BBC Electric Proms: Burt Bacharach – BBC 2. 11.20pm – 12.05am
The third annual Electric Proms gets under way in Camden’s Roundhouse. Opening this year’s festival is Burt Bacharach, the songwriter behind some of pop’s most sublime and memorable moments. Accompanying him is the BBC Concert Orchestra.

The Professionals – ITV 4. 8.00pm – 9.00pm
A summit meeting is in jeopardy when a ministerial secretary leaks security information to her lover. 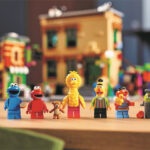