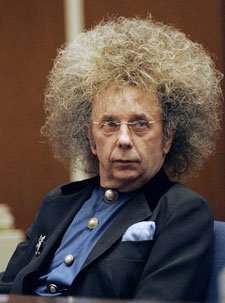 Barry Murphy returns once more trawl the TV and radio guides (so you don’t have to) to find anything worth tuning into this week. All listings are for UK terrestrial TV, Freeview and national radio, with the shows running from Friday 24th October to Thursday 30th October 2008.

The undoubted highlight of the week is The Agony and Ecstasy of Phil Spector (Saturday 25th. BBC 2. 9.40pm). In his first TV interview for 35 years, legendary music producer Phil Spector dissects his songs and talks about his reverb-laden "wall of sound" production techniques. The documentary also features footage from his recent high-profile trial.

BBC Electric Proms gets underway this week with highlights including The Last Shadow Puppets from Liverpool’s Philharmonic Hall (BBC 4. Friday 24th, 11.35pm) and Oasis from the Roundhouse in London (BBC 2. Sunday 26th, 11.10pm).
Finally, the recent thee part adaption of the Jake Arnott novel He Kills Coppers gets a repeat showing over consecutive nights starting Monday 27th, 10pm on ITV 3.

Minder – ITV 4. 6.00pm – 7.00pm
Arthur’s mini cab firm is besieged by violent assaults and so he drafts Terry in to sort the problem out.

The Professionals – ITV 4. 7.00pm – 8.00pm
An old enemy of Doyle’s stirs up trouble as a cover for his revenge attack on the CI5 operative.

The Story of the Guitar (3/3) – BBC 4. 11.30pm – 12.30am
This Time it’s Personal. The electric guitar has unleashed a seemingly inexhaustible sonic invention among guitarists. In the final episode Alan Yentob talks to some of them, including David Gilmour, Tony Iommi and Pete Townshend, about how the instrument has changed their lives.

All You Need is Love – More4. 12.45am – 1.55am
Tony Palmer’s mammoth documentary series on the birth of pop gets a rare re-run after it’s recent release on DVD. Tonight’s film, entitled Sour Rock, looks at the dark side of the swinging sixties. Donovan, Frank Zappa and Eric Burdon are among those telling of rock’s unreal excesses and their real grim consequences.

The Avengers – BBC 4. 12.50am – 1.40am
A Touch of Brimstone. In this infamous episode Mrs Peel infiltrates a modern-day Hellfire club by presenting herself as the Queen of sin.

The Agony and Ecstasy of Phil Spector – BBC 2. 9.40pm – 11.20pm
Arena. New. Legendary, reclusive and controversial, Phil Spector changed the face of pop with his reverb-laden "wall of sound" production techniques, working with artists including the Ronettes and John Lennon. Here, Spector explains his creative process in a rare interview from 2007, plus footage from his high-profile trial of the same year.

Film: The Ipcress File (1965) – ITV 4. 10.25pm – 14.40am
Spy thriller starring Michael Caine. Intelligence agent Harry Palmer is plunged into the world of counter espionage as he uncovers a bizarre "brain drain" among scientists.

Mad Men (1/13) – BBC 4. 11.30pm – 12.20am
Smoke Gets in your Eyes. Another chance to see the first series of this critically acclaimed but seldom watched US drama set in the cut-throat world of advertising in the early 1960s. Top executive Don Draper’s position comes under threat from his competitors.

Film: The Wicker Man (1973) – ITV 1. 2.40am – 4.10am
Classic horror starring Edward Woodward. When a policeman receives an anonymous letter suggesting that a girl has mysteriously disappeared from a small island community, he sets out to investigate.

The Professionals – ITV 4. 6.00pm – 7.00pm
The team assist the Russian authorities in tracking down an agent.

Minder – ITV 4. 9.00pm – 10.00pm
Terry encounters the seedier side of the entertainment industry during a night’s work in a disco.

Stephen Fry in America – BBC 1. 9.00pm – 10.00pm
Mississippi. A 2,000 mile journey up the river sees our intrepid traveller get the blues with actor Morgan Freeman, while in Chicago he drives guitar Buddy Guy round old stomping grounds.

Film: Layer Cake (2004) – Five. 9.00pm – 11.10pm
Tough British crime thriller starring Daniel Craig. A rising young drug dealer wants to make quick money and then retire early to enjoy the benefits. But his plans are thwarted when he is asked by a local crime boss to find the missing daughter of a powerful friend.

BBC Electric Proms – BBC 2. 11.10pm – 12.10am
Oasis. Finale of the event, from the Roundhouse in London, Noel, Liam and the band promise a night of classic anthems plus songs from their new album Dig Out Your Soul, with special accompaniment from the Crouch End Festival Chorus.

BBC Electric Proms: Goldfrapp – BBC 4. 12Midnight – 12.30am
Performance of their latest album, accompanied by strings and a choir.

Film: The Night Caller (1965) – BBC 2. 2.10am – 3.30am
Thriller starring John Saxon and Maurice Denham. British sci-fi about aliens who land on Earth in order to kidnap women for breeding, thus reviving their ailing race. A wanted advert in Bikini Girl magazine raises suspicion when young girls responding begin to disappear. After receiving an unusually high number of reports of missing women, the police begin to search for an explanation. This looks like one to set the recorder for.

James Bond, the Last Englishman – BBC Radio 4. 1.30pm – 2.00pm
In the year of Ian Fleming’s centenary, David Cannadine sets the author and his James Bond novels in their historical context. Bond was popular not just because he was sexy and suave: he was a fantasy to console a country that had lost its empire but not yet found a role in the world.

BBC Electric Proms: Highlights – BBC 2. 11.50pm – 12.50am
The cream of this year’s gigs from London and Liverpool, including Oasis, the Last Shadow Puppets, Burt Bacharach, Sharleen Spiteri and Goldfrapp.

British Style Genius (4/5) – BBC 2. 9.00pm – 10.00pm
By Royal Appointment – the Country Look. Obsessed by the weather as we are, it is perhaps no surprise that the nearest the British come to a national costume consists of items designed to repel the wind and rain. With caps duly doffed to Burberry and Barbour, tonight’s show explores the enduring appeal of the "country look", doggedly espoused by the Queen, and now being elaborated upon by designers including Dolce & Gabbana, Christopher Bailey and Luella Bartley.

He Kills Coppers (2/3) – ITV 3. 10.00pm – 11.00pm
The country is in uproar after the senseless killings of three police officers. Frank, distraught at the death of his best friend, leads the desperate chase to find Billy Porter. Concludes tomorrow at 10pm.

The Professionals – ITV 4. 6.00pm – 7.00pm
Bodie and Doyle spring into action when a government employee is blackmailed into revealing secret plans for a new type of jet-engine tank by East German agents.

He Kills Coppers (3/3) – ITV 3. 10.00pm – 11.00pm
Nearly 20 years after the killings, the trail on Billy Porter has gone cold. But for Frank Taylor and Tony Meehan their determination to find him is undimmed, for very different reasons.

Get creative with the Star Wars Stationery Set