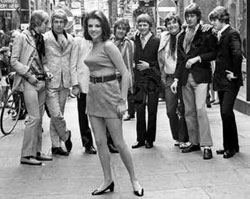 Barry Murphy returns once more trawl the TV and radio guides (so you don’t have to) to find anything worth tuning into this week. All listings are for UK terrestrial TV, Freeview and national radio, with the shows running from Friday 31st October to Thursday 6th November 2008.

The last part of the BBC’s series exploring what makes British fashion and style distinctive British Style Genius (Tuesday 4th. BBC 2, 9pm) concludes with a look at how many of Britain’s most iconic fashions have evolved from the street rather than the catwalk. Original Mods show how they patched together influences from American jazz, French arthouse cinema and Italian cafe culture to create a sharper look and there’s a look at the hidden subtleties behind the 1970s skinhead style, with its militaristic, boots-meets-Ben Sherman look. There’s also a look at how the European sportswear-influenced 1980s street style took its inspiration from the tennis courts and sowed the seeds of a label obsession that still dominates the street look today.

In this weeks radio highlight Neneh Cherry tells the story Fela Anikulapo Kuti and highlights the relevance of his influence today on the music scene of Nigeria and across the world in The Afrobeat Revolutionary – Fela Kuti (Tuesday 4th. BBC Radio 2. 10.30pm).

Hotel California: LA from The Byrds……to The Eagles – BBC 4. 12.30am – 2.00am
Mark Strong narrates a documentary charting the development of the LA music scene in the 1960s and 70s.

All You Need is Love – More4. 12.40am – 1.50am
Tony Palmer’s mammoth documentary series on the birth of pop gets a rare re-run after it’s recent release on DVD. This weeks film looks at the story of glam rock in the 1970s.

Stephen Fry in America – BBC 2. 7.15pm – 8.15pm
Mississippi. A 2,000 mile journey up the river sees our intrepid traveller get the blues with actor Morgan Freeman, while in Chicago he drives guitar Buddy Guy round old stomping grounds.

David Ogilvy: the First Mad Man – BBC 4. 12.25am – 1.25am
The extremes and eccentricities of the founding father of the modern advertising industry, revealed through interviews with those who knew and worked with him, plus exclusive access to his archive.

Carry On Up the Khyber (1968) – Channel 4. 3.20pm – 5.00pm
Saucy comedy starring Sidney James and Kenneth Williams. India 1895: in the North-West Frontier province, the villainous Khasi of Kalaber plans a rebellion against the governor, Sir Sidney Ruff-Diamond.

Film: A Fistful of Dollars (1964) – Five. 7.05pm – 9.00pm
Classic spaghetti western starring Clint Eastwood. A mysterious gunfighter arrives in a lawless town on the Mexican border. The town is run by two rival families and, after witnessing the stranger’s lethal gunfighting prowess, both are eager to recruit him to their cause.

Stephen Fry in America – BBC 1. 9.00pm – 10.00pm
A flight over the Rocky mountains, a ride through the snow of a dogsled, and a visit to the badlands of South Dakota are all part of this week’s itinerary. Plus the bizarre home of some Kansans in an underground missile base and a gala dinner in Houston that’s a far cry from a band of Tex-Mex musicians at the border in El Paso.

Neil Young – Don’t be Denied – BBC 4. 11.15pm – 12.15am
New. Tracing the musical journey of the legendary singer/songwriter through interviews and unseen performance footage.

Hammer House of Horror – ITV 3. 12Midnight – 1.05am
The Carpathian Eagle. A police inspector investigates the deaths of several men found with their hearts torn out. Gruesome thriller starring Anthony Valentine and Suzanne Danielle, with a young Pierce Brosnan in an early supporting role as one of the killer’s victims.

Jake on the Box – BBC 2. 11.20pm – 12.20am
Examining the career of Leeds troubadour Jake Thackray, which saw him perform his unique style of satirical but hauntingly romantic music and poetry on television and radio, and live on stage, making appearances on The Frost Report, That’s Life! and The Braden Beat.

British Style Genius (5/5) – BBC 2. 9.00pm – 10.00pm
Loud and Proud: the Street Look – Over the past 50 years, fashions have evolved from the streets have proved that conservative British style is a myth. The ted’s look was edgy, while mods were symbolic of a smart 1960s Britain. A neat reaction against hippy chic, skinhead style was stripped down and militaristic. Then in 1977, Liverpool witnessed the beginnings of the casuals revolution.

Film: The Devil Rides Out (1968) – ITV 4. 11.00pm – 1.00am
Classic Hammer Horror starring Christopher Lee. The Duc de Richleau discovers that his friend Simon has come under the influence of a group of Satanists. When Simon disappears, Richleau sets out to rescue him and confronts devil worshipper Mocata.

The Afrobeat Revolutionary – Fela Kuti –  BBC Radio 2. 10.30pm – 11.30pm
Neneh Cherry tells the story of Nigerian revolutionary and music superstar Fela Kuti, who in the 1960s took political inspiration from American Black Panther Sandra Isidore and devised Afrobeat – a mix of Nigerian drums and James Brown-style horns combined with his own saxophone, keyboard, guitar and quasi-rapping sounds. An outspoken critic of social oppression and a consistently fervent enemy of the government, Kuti was hounded, jailed, tortured and nearly killed by those determined to silence him. Years of abuse and the HIV virus took their toll, and Kuti died in 1997, aged 58, with over a million people lining the streets of Lagos for his funeral. Discussing his formidable legacy are Kuti’s daughters and sons (including musicians Femi Kuti and Seun Kuti), manager Rikki Stein, Sandra Isidore, drummer Tony Allen and slam poet Saul Williams.

Minder – ITV 4. 6.00pm – 7.00pm
When the police pick up Arthur for shady dealings, Terry goes in search of those responsible.

Film: The Devil Rides Out (1968) – ITV 4. 10.00pm – 12Midnight
Classic Hammer Horror starring Christopher Lee. The Duc de Richleau discovers that his friend Simon has come under the influence of a group of Satanists. When Simon disappears, Richleau sets out to rescue him and confronts devil worshipper Mocata.

The Prisoner allnighter in Central London