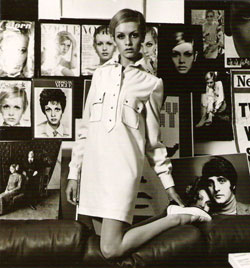 Barry Murphy returns once more trawl the TV and radio guides (so you don’t have to) to find anything worth tuning into this week. All listings are for UK terrestrial TV, Freeview and national radio, with the shows running from Friday 3rd October to Thursday 9th October 2008.

The TV highlight this week is the first of a new five part series of documentaries British Style Genius (BBC 2. Tues 7th, 9pm) which tells the story of UK high-street fashion by working backwards from the phenomena of Topshop and M&S to the days of Biba and Mary Quant. Also new is a three part history The Story of the Guitar which begins on BBC 1 (Sun 5th, 10.20pm). In the first part Alan Yentob looks at the rise of the acoustic guitar in the 1950s and speaks to Bert Weedon, whose Play in a Day books inspired a generation to get strumming.

Fifty years ago this Saturday Brian Matthews presented the first edition of Saturday Club, a crucial musical source for millions of pop-starved Britons. The radio highlight this week is a special Sounds of the 60s (BBC Radio 2, Sat, 4th. 8am) in which Matthews takes a nostalgic look back and plays some sessions from 1963 with the Everly Brothers and the Beatles.
Also worth tuning into is a new four-part series profiling singer and saxophonist Louis Jordan Choo Choo Ch’Boogie: the Louis Jordan Story begins on (Monday 6th. BBC Radio 2. 11.30pm), while 6 Music repeat the four part documentary Trojan Explosion (Week-nights starting Mon. 6th, 12Midnight).

Once upon a Time in New York – BBC 4. 9.00pm – 10.00pm
Documentary revealing how the deprived streets of 1970s New York heralded a musical revolution – the birth of hip hop, disco and punk – inspired by the likes of the Velvet Underground and Grandmaster Flash.

Arena: The Burger and the King – BBC 4. 10.00pm – 10.55pm
Humorous history of Elvis Presley’s career as a gourmand, which culminated in a diet of pizzas and French loaves stuffed with peanut butter.

The Avengers – BBC 4. 12.25am – 1.15am
Room Without A View. A missing scientist suddenly turn up at his home and attacks his Chinese wife, apparently fearful of anyone oriental.

All You Need is Love – More4. 1.05am – 2.15am
Tony Palmer’s mammoth documentary series on the birth of pop gets a rare re-run after it’s recent release on DVD. Tonight’s film looks at the origins of Folk and Protest music, featuring interviews and footage of artists including Woody Guthrie and Leonard Cohen.

Film: Curse of the Crimson Altar (1968) – BBC 2. 2.10am – 3.35am
British horror starring genre legends Boris Karloff ,Christopher Lee and Barbara Steele. Antique dealer Robert Manning heads to Craxton Lodge in Graymarsh, the last known location of his missing brother, Peter. J.D. Morley. The owner of Craxton Lodge claims to have never heard of Peter but invites Manning to stay. However, Manning soon begins to discover evidence that Peter was there and that he may have met his fate under unpleasant circumstances. Meanwhile, he is plagued by dreams of occultist rituals concerning the witch, Lavinia Morley, who was burnt at the stake centuries ago and has promised revenge on the ancestors of her persecutors. A rather lacklustre offering from the Tigon studios, it does include a huge psychedelic party, full of half-naked dancing floozies, goofy late-60’s fuzztone rock, and lots and lots of champagne-fueled making out – so it can’t be all bad.

Sounds of the 60s –  BBC Radio 2. 8.00am – 10.00am
A special edition in which Brian Matthew celebrates today’s 50th anniversary of BBC radio’s Saturday Club – the phenomenally popular weekly pop programme which, until its demise in January 1969, showcased the latest releases and featured live sets. Expect a feast of archive sessions and unbridled nostalgia.

Film: Planet of the Apes (1967) – Five. 5.50pm – 8.00pm
Classic sci-fi adventure starring Charlton Heston. Four astronauts crash-land in the wilderness of an alien planet, a place where evolution has taken a strange turn – apes are the dominant species and man is the beast. What are the chances of survival in this hostile world?

The Sweeney – ITV 4. 8.00pm – 9.00pm
Regan and Carter uncover a plot to smuggle gold into the Middle East disguised as weights.

Dance Britannia (1/3) – BBC 4. 9.00pm – 10.00pm
The story of popular dance in British culture during the 20th century, beginning with a look at the impact of new styles in the aftermath of the First World War.

The South Bank Show – ITV 1. 10.00pm – 11.00pm
The One Ronnie. An insight into the world of Ronnie Corbett, who talks with Melvyn Bragg about contemporary comedy and the past.

The Story of the Guitar (1/3) – BBC 1. 10.20pm – 11.20pm
New. In the Beginning. How did the guitar become the world’s favourite instrument? Alan Yentob begins his personal journey with the rise of the acoustic guitar and features Bert Weedon, Pete Townshend, Bill Bailey and John Williams.

Spy Stories – BBC 4. 11.30pm – 12.30am
The Time Shift strand looks at the evolution of British espionage in the 20th century, considering its long relationship with spy fiction.

Film: The Sorcerers (1967) – BBC 2. 1.30am – 2.55am
Cult British science-fiction horror, directed by Michael Reeves and starring Boris Karloff and Ian Ogilvy. Set in Swinging Sixties London, a well-meaning professor discovers a way of controlling another person’s mind through hypnotism. With "groovy" scenes set in Blaises night-club, low budget hallucination effects and a young Susan George getting slashed up with a pair of scissors, this is proper mod-horror.

The Sweeney – ITV 4. 6.00pm – 7.00pm
Regan and Carter uncover a plot to smuggle gold into the Middle East disguised as weights.

British Style Genius (1/5) – BBC 2. 9.00pm – 10.00pm
New series. A Fashion Democracy – the High Street Look. This entertaining exploration of what makes British fashion and style so distinctive and influential begins with a look at how high fashion became "high street", and includes exclusive behind-the-scenes footage of Kate Moss and her team as they prepare her autumn 2008 collection for Topshop. Plus a look back to the 1960s, where the democratisation of fashion began with the likes of Mary Quant, Twiggy and Biba’s founder Barbara Hulanicki.

Flight of the Conchords (5/12) – BBC 4. 9.30pm – 10.00pm
Jermaine reconnects with Sally and moves out of the apartment. Bret then fixates on her, at the expense of his relationship with Coco.

Comedy Classics: Doctor in the House – ITV 1. 10.35pm – 11.35pm
A celebration of the sitcom from its beginnings as a novel to the films it inspired starring Dirk Bogarde, and the TV series that first appeared in 1969. A classic episode, Face the Music, follows.

Between the Lines: Railways in Fiction and Film – BBC 4. 9.00pm – 10.00pm
New. In this Timeshift film, Andrew Martin explores the changing depiction of trains in various works of literature and film.

Film: Escape from New York (1981) – ITV 4. 11.00pm – 1.00am
Violent futuristic action thriller from John Carpenter, starring Kurt Russell. The year is 1997 (!) and Manhattan has been turned into a maximum security prison. When the president’s plane crashes into this lawless hell, new convict Snake Plisskin is called in to help.