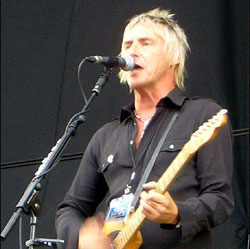 Barry Murphy returns once more trawl the TV and radio guides (so you don’t have to) to find anything worth tuning into this week. All listings are for UK terrestrial TV, Freeview and national radio, with the shows running from Friday 14th November to Thursday 20th November 2008.

This week BBC 4 devote an evening to the bard of Woking, Paul Weller. Documentary Into Tomorrow (BBC 4. Friday 14th, 9pm)  looks at his 30-year career using unseen photos and archive footage. It covers his upbringing in Woking, his years with The Jam and The Style Council, his insecurity after being dropped by a record company, his unexpected return to popularity in the 1990s and his view on where he finds himself now. Contributors include his parents, Bruce Foxton, Boy George and Noel Gallagher.

This is followed by BBC Sessions: Paul Weller (Friday 14th.10.30pm – repeated 1.10am) a newly filmed concert in which Weller performs songs from his widely acclaimed recent album 22 Dreams, as well as classics from both his solo career and his time with The Jam.

Paul Weller: Into Tomorrow – BBC 4. 9.00pm – 10.30pm
New. Intimate biography, told by Weller and those who know him, featuring rare and previously unseen photos and archive footage. It charts his upbringing in Woking, his early years with The Jam, the creation of The Style Council, his return to popularity in the early 1990s and his view on where he finds himself now.

BBC Sessions: Paul Weller – BBC 4. 10.30pm – 11.30pm (Repeated 1.10am)
New. Paul Weller performs songs from his widely acclaimed recent album 22 Dreams, as well as classics from both his solo career and his time with The Jam.

The New Avengers – BBC 4. 11.30pm – 12.20am
Steed, Purdey and Gambit investigate the death of a colleague on a Scottish island.

The Avengers – BBC 4. 12.20am – 1.10am
What the Butler Saw. Steed becomes a gentleman’s gentleman, while Mrs Peel faces a fate worse than death.

Film: The Tomb of Ligeia (1964) – BBC 2. 2.15am – 3.35am
Roger Corman directed horror starring Vincent Price. The second wife of Verden Fell is disturbed when she discovers how far her husband will go to keep the memory of his first wife alive.

Friday Night with Glen Campbell – BBC Radio 2. 7.30pm – 9.15pm
A special concert by country-pop giant Glen Campbell. Accompanied by the BBC Concert Orchestra, Campbell performs songs from Meet Glen Campbell – his recent album of covers – as well as his now-classic 1960s hits By the Time I Get to Phoenix, Witchita Linesman and Galveston, plus Rhinestone Cowboy.

Film: Fiend Without a Face (1957) – BBC 2. 3.35am – 4.45am
Sci-fi horror starring Marshall Thompson. The citizens of a small Canadian town are shocked by a series of deaths, and are convinced something on a nearby US Air Force base is to blame.

50 Years of Little Richard – BBC Radio 4. 3.30pm – 4.00pm
One of the key innovators of rock ‘n’ roll, Little Richard talks to Sarfraz Manzoor about his half-century as an extravagant and wild performer. Looking back on his life, the writer of some of the most hallowed songs in the rock cannon, such as Good Golly, Miss Molly and Tutti Frutti, talks to Manzoor about a life filled by race, religion and music.

The Professionals – ITV 4. 5.00pm – 6.00pm
Bodie and Doyle are assigned to investigate when a shipment of gold bullion goes missing.

Film: The Life and Death of Peter Sellers (2003) – BBC 1. 11.20pm – 1.20am
Biographical drama starring Geoffrey Rush. Following the success in The Goon Show, Peter Sellers sets his sights on Hollywood superstardom, but the cost of his ruthless ambition is a deep insecurity and a loss of identity.

BBC Sessions: Paul Weller – BBC 4. 12Midnight – 1.00am
New. Paul Weller performs songs from his widely acclaimed recent album 22 Dreams, as well as classics from both his solo career and his time with The Jam.

Hammer House of Horror – ITV 3. 12.15am – 1.20am
Children of the Full Moon. A man finds himself caught up in a terrifying series of events after being involved in a car crash. Eerie tale, starring Christopher Cazenove and Diana Dors

The Department Store (1/3) – BBC 4. 9.00pm – 10.00pm
New series. Documentary about the independent shops fighting back against the big brands. In this edition, Richard Macer spends six months at Milners, a family-run store in the Yorkshire Dales.

True Stories: Kurt Cobain – About a Son – More4. 10.00pm – 12Midnight
Documentary using extracts from more than 25 hours of previously interviews to highlight the troubled Nirvana frontman’s struggle to cope with his fame.

A Study in Sherlock – BBC 4. 7.30pm – 8.10pm
Time Shift film examining the various portrayals of Sherlock Holmes over the years, and what they reveal about the generations that created them.

Film: The Football Factory (2004) – Film4. 11.10pm – 12.55am
Unflinchingly violent, decently acted but morally ambiguous drama that examines soccer hooliganism through the lives of a firm of thugs who "support" Chelsea.

The New Avengers – BBC 4. 7.40pm – 8.30pm
Members of the public are hypnotised into becoming assassins.

The Department Store (1/3) – BBC 4. 10.00pm – 11.00pm
New series. Documentary about the independent shops fighting back against the big brands. In this edition, Richard Macer spends six months at Milners, a family-run store in the Yorkshire Dales.