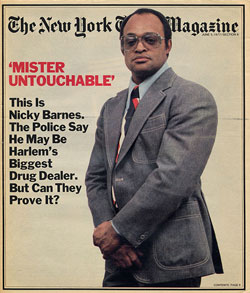 Barry Murphy returns once more trawl the TV and radio guides (so you don’t have to) to find anything worth tuning into this week. All listings are for UK terrestrial TV, Freeview and national radio, with the shows running from Friday 21st November to Thursday 27th November 2008.

It’s a mixed bag this week on TV, with the only new things to talk about being The Culture Show (Tuesday 25th. BBC 2,10pm) in which actor and Motown devotee Martin Freeman meets legendary house band the Funk Brothers and True Stories: Mr Untouchable (More4. Tuesday 25th, 10pm) a documentary charting the rise and fall of Nicky Barnes (inspiration of Ridley Scott’s recent American Gangster film) a heroin addict who in the 1970s went on to become the most powerful black drugs baron in the history of New York.

The New Avengers – BBC 4. 12.05am – 1.00am
House of Cards. Steed, Purdey and Gambit face trouble when network of sleeper agents is activated.

The Avengers – BBC 4. 1.00am – 1.50am
The House That Jack Built. Emma is told that she has been left the estate of a mysterious uncle.

Film: The Seventh Victim (1943) – BBC 2. 1.55am – 3.05am
Horror starring Kim Hunter and Tom Conway. In New York, Mary Gibson’s search for her missing sister leads to the discovery of a terrifying cult.

Movie Outcasts: The Making of Easy Rider – BBC Radio 4. 10.30am – 11.00am
Former Monkee Micky Dolenz looks at the making of classic road movie Easy Rider, which was produced by Bert Schneider and Bob Rafelson, the same pair who oversaw the production of the Monkees’ TV show. Featuring interviews with Peter Tork, Henry Jaglom, Karen Black and Jim Frawley.

Survivors (1/6) – BBC 1. 9.00pm – 10.30pm
An up-dated re-make of Terry Nation’s 1975 series. Gripping adventure drama set in the present day, focusing on the aftermath of a devastating virus that wipes out most of the world’s population. Continues on Tuesday at 9pm.

Hammer House of Horror – ITV 3. 12.15am – 1.20am
Visitor From the Grave. Another hair-raising tale of supernatural horror.

The Champions – ITV 4. 6.00pm – 7.00pm
The heroes attempt to stop a criminal organisation threatening to blow up London with a nuclear bomb.

Film: This is England (2006) – Channel 4. 10.00pm – 12.05am
Shane Meadows’ drama set during the early 1980s. After losing his father in the Falklands war, Shaun finds friendship with a gang of skinheads. But, when a new face appears on the scene, the group’s loyalties become divided.

Shopping for England – BBC 4. 11.10pm – 12.10am
How Selfridges and Woolworths shaped the British high street.

Survivors (2/6) – BBC 1. 9.00pm – 10.00pm
Abby and her new friends learn that a gang of thugs have taken control of all the local shops leaving them short of food and water, as the new action adventure continues.

True Stories: Mr Untouchable – More4. 10.00pm – 12Midnight
Documentary charting the rise and fall of Nicky Barnes, a heroin addict who in the 1970s went on to become the most powerful black drugs baron in the history of New York.

Charlie Brooker’s Screenwipe (2/6) – BBC 4. 10.30pm – 11.00pm
New series. The acid-tongued critic looks at how portrayals of men and women in commercials have changed over the years to reflect who really has control of the purse strings.

Bob’s Big Freeze – BBC Radio 2. 10.30pm – 11.30pm
During the freezing winter of 1962/63 Bob Dylan made his first trip to London, having been spotted the previous summer in a Greenwich Village basement by BBC director Phillip Saville, who invited him to appear alongside David Warner in a BBC play Madhouse on Castle Street. Bob Harris tells the story of Dylan’s visit to Britain, from his stay with Martin Carthy to cutting an LP (in a Charing Cross Road record-shop basement) under the pseudonym Blind Boy Grunt, to performing songs such as Don’t Think Twice, It’s Alright and Bob Dylan’s Dream.

Long Players (2/4) – BBC Radio 2. 11.30pm – 12Midnight
New series. David Quantick presents a relatively poignant ode to the vinyl record album (aka LP). Tonight he attempts to assess the LP’s heyday, with a look at artwork, the Beatles impact and various triumphs and excesses.

Film: The Future Is Unwritten (2006) – Channel 4. 11.40pm – 2.00am
Revealing music documentary that charts the life of Joe Strummer, frontman of influential British punk group The Clash.

The Jacksons Are Coming – Channel 4. 9.00pm – 10.00pm
What are the members of the Jackson 5 doing wandering around Devon? In this documentary film-maker Jane Preston follows assorted members of the family as they leave LA to search for a home in a Devon fishing village. How will the village folk cope with their famous new neighbours and the world’s media? And what happens to the Jacksons when the dream turns sour?

BBC 4 Sessions: Georgie Fame – BBC 4. 11.00pm – 12Midnight
The musician reunites with some of the original members of the Blue Flames for a performance at LSO St Lukes. Includes guests Zoot Money and Madeleine Bell.