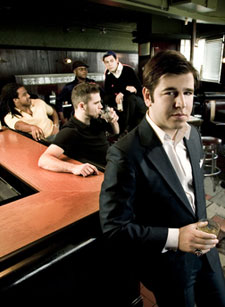 Barry Murphy returns once more trawl the TV and radio guides (so you don’t have to) to find anything worth tuning into this week. All listings are for UK terrestrial TV, Freeview and national radio, with the shows running from Friday 7th November to Thursday 13th November 2008.

Boston soul troupe Eli Paperboy Reed and the True Loves, currently touring Europe, make their debut appearance on Later Live… with Jools Holland (BBC 2. Tuesday 11th, 10.00pm) as a prelude to their forthcoming UK shows in December. Meanwhile BBC 4 start a repeat run of The New Avengers (Thursday 13th, 7.40pm). In this, the pilot episode, Steed and his new partners Purdey and Mike Gambit team up to stop a group of monks from reviving Adolf Hitler. They don’t write plots like they used to.

On the radio this week, one of the key innovators of rock ‘n’ roll, Little Richard talks to Sarfraz Manzoor about his half-century as an extravagant and wild performer in 50 Years of Little Richard (Radio 4. Tuesday 11th, 1.30pm), while CP Lee talks to some of those who witnessed the 1964 UK tour of some of America’s top blues musicians in From Manchester to the Mississippi (BBC Radio 4. Thursday 13th, 11.30am).

The Professionals – ITV 4. 7.00pm – 8.00pm
Bodie becomes a walking time bomb when he crosses a gang of international gun runners.

All You Need is Love – More4. 12.20am – 1.25am
Last episode of Tony Palmer’s mammoth documentary series on the birth of pop.

Film: Wait Until Dark (1967) – ITV 1. 2.05am – 3.55am
Menacing thriller starring Audrey Hepburn. A resourceful blind woman is terrorised by three murderous criminals in her own home after her husband is given a doll that, unknown to him, contains drugs.

Film: Scream of Fear (1961) – BBC 2. 12.40am – 2.00am
Creepy Hammer Horror psychological thriller starring Susan Strasberg. Penny Appleby travels to the French Riviera to visit her long-absent father. On her arrival she is told by her stepmother that he is away, but then Penny makes a sinister discovery.

Minder – ITV 4. 8.00pm – 9.00pm
Arthur attempts to sell off cheap reproduction pottery to an antiques dealer, but gets drawn into a shady horse-racing deal instead.

True Stories: Thriller in Manila – More4. 10.00pm – 12Midnight
In 1975, in the Philippine capital Manila, Muhammad Ali and Joe Frazier fought their third and final match. Although they were previously friends, Ali’s involvement in the Black Nation of Islam caused a rift.

50 Years of Little Richard – BBC Radio 4. 1.30pm – 2.00pm
One of the key innovators of rock ‘n’ roll, Little Richard talks to Sarfraz Manzoor about his half-century as an extravagant and wild performer. Looking back on his life, the writer of some of the most hallowed songs in the rock cannon, such as Good Golly, Miss Molly and Tutti Frutti, talks to Manzoor about a life filled by race, religion and music.

The New Avengers – BBC 4. 7.40pm – 8.30pm
The Eagles Nest. A new repeat showing of this classic 70s series starts with the pilot episode. Steed and his new partners Purdey and Mike Gambit team up to stop a group of monks from reviving Adolf Hitler. Includes special guest Peter Cushing.

From Manchester to the Mississippi – BBC Radio 4. 11.30am – 12Mid-day
In 1964 some of America’s greatest black musicians were bought over to Britain to perform a series of concerts. The Only one that was recorded took place at an old railway station in Manchester. As the heavens opened, Muddy Waters, Sonny Terry and Brownie McGhee, and Sister Rosetta Tharpe played to an audience who had never seen anything like it before. CP Lee talks to some of those who witnessed the concert and the musicians who were inspired by it, as well as the tour manager Joe Boyd.