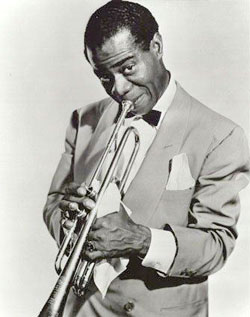 Barry Murphy returns once more trawl the TV and radio guides (so you don’t have to) to find anything worth tuning into this week. All listings are for UK terrestrial TV, Freeview and national radio, with the shows running from Friday 12th December to Thursday 18th December 2008.

BBC 4 kick off their Swing strand with a night of programmes profiling jazz legend Louis Armstrong on Thursday 18th December. As well as the documentary Omnibus: The Wonderful World of Louis Armstrong (9pm) the evening also features footage of the All-Stars British visit of 1968 in Show of the Week (10.10pm) and Armstrong’s last know filmed performance from the 1970 Newport Jazz Festival in Good Evening Ev’rybody (11pm).

Roy Sings Orbison – BBC 4. 10.00pm – 10.30pm
The singer performs some of his greatest hits, includes Only the Lonely, Crying, Penny Arcade, Blue Bayou and It’s Over.

Charlie Brooker’s Screenwipe (4/6) – BBC 4. 11.30pm – 12Midnight
The critic casts an eye over the "mission" documentary genre. One of the funniest pieces of television this year – not to be missed.

The New Avengers -BBC 4. 12Midnight – 12.50am
Cat Amongst the Pigeons. The team try to save an ecologist they have been warned is going to be killed at midday.

The Avengers – BBC 4. 12.50am – 1.40am
Honey for the Prince. Steed and Mrs Peel follow the trail to a company who bring people’s fantasies to life.

A Life on the Box: Arthur Lowe – BBC 2. 7.10pm – 7.55pm
In the first programme of a Dad’s Army-themed evening, Sir Terry Wogan introduces a collection of clips featuring one of the show’s brightest stars, and one of this country’s best-loved actors, Arthur Lowe, with tributes from fellow actors and fans.

Missing Presumed Wiped – BBC 2. 7.55pm – 8.25pm
Examining how an appeal to treasure hunters turned up some priceless episodes of Dad’s Army thought to have been lost for ever.

Dad’s Army in Colour – BBC 2. 8.25pm – 9.00pm
Room at the Bottom. Ian Lavender presents a remastered version of a classic episode of the long-running sitcom that has not been seen in colour for almost 40 years, in which Captain Mainwaring is mortified to discover that he may not actually be a commissioned officer.

Comedy Connections – BBC 2. 9.00pm – 10.00pm
A look at the complex web of tunnels and trenches that crawled out from one of the best loved shows of all time, Dad’s Army. Jimmy Perry and David Croft may have created the Walmington-on-sea Home Guard platoon but surprisingly they didn’t give the show its name.

The Peter Serafinowicz Show… Best of – BBC 2. 10.50pm – 11.35pm
Compilation of highlights from the first series of the off-the-wall comedy sketch show.

Film: The Greatest (1977) –  ITV 4. 11.40pm – 1.50am
A lamentable attempt to chronicle the tumultuous life and career of self-proclaimed ‘Greatest boxer of all-time’, Muhammad Ali, between a 14 year period from his 1960 Olympic success to regaining the world title against George Foreman in 1974. Starring Muhammad Ali as himself.

The EMI Story – BBC Radio 4. 10.30am – 11.00am
EMI is a music industry icon, but in a dramatic takeover, the loss-making record company was bought by private equity firm Terra Firma in a multibillion-pound deal. Head of business at The Daily Telegraph Damian Reece investigates this controversial move. Terra Firma boss Guy Hands answers criticisms that the deal has seen swingeing job losses, massive cost cutting and harsh comments from some artists’ managers. Can Hands make his investment pay and what chance has EMI got of reinventing itself to compete in the online age?

The Professionals – ITV 4. 6.00pm – 7.00pm
Bodie and Doyle’s country holiday spirals into chaos when the inhabitants of a farmhouse are held hostages.

The Sweeney – ITV 4. 7.00pm – 8.00pm
Regan gets personally involved when his daughter is kidnapped.

Charlie Brooker’s Screenwipe (4/6) – BBC 4. 12Midnight – 12.30am
The critic casts an eye over the "mission" documentary genre. One of the funniest pieces of television this year – not to be missed.

The Hard Sell – BBC 4. 8.00pm – 8.30pm
How advertisers have used TV commercials to sell children’s toys in Britain over the past 40 years.

Sex, Drugs and Rock ‘n’ Roll: the 60s Revealed (3/3) – Five. 9.00pm – 10.00pm
Stars of the era, including Vanessa Redgrave and Lulu, look back on the age of sexual promiscuity, racial tension and street violence. Plus footage of Sammy Davis Jr, who talks about race relations, and Enoch Powell, shortly after his "Rivers of Blood" speech.

Legends: Roy Orbison – BBC 4. 11.35pm – 12.35am
New. Marking the 20th anniversary of the death of Roy Orbison, this programme celebrates the musician’s life and career. Featuring interviews with his widow and manager Barbara Orbison and stars such as Bill Wyman, Bernie Taupin, Robin Gibb and, predictably, rent-a-gobshites Elvis Costello and Bono.

Jools Holland – BBC Radio 2. 10.30pm – 11.00pm
Tonights guests are Archie Brown and Mick Talbot of re-united band The Bureau, who are joined by Jools and the band for a version of their 1981 song Only for Sheep.

The Professionals – ITV 4. 8.00pm – 9.00pm
Bodie’s mental state is questioned when he becomes preoccupied with a gang of Hell’s Angels.

Legends: Humphrey Lyttleton – BBC 4. 8.00pm – 9.00pm
A celebration of the life and career of Humphrey Lyttleton who, in a career spanning more than 60 years, established himself as a successful band leader and was feted by Louis Armstrong as Britain’s best trumpeter.

The Cult of… Survivors – BBC 4. 10.00pm – 10.30pm
Insight into 1970s sci-fi drama Survivors, showing how its self-sufficiency storyline was inspired by political problems during the decade.

Kenneth Williams: Fantabulosa! – BBC 4. 11.00pm – 12.20am
Michael Sheen gives a fine performance as the camp actor and comedian in this compelling dramatisation of his candid and breathtakingly caustic diaries.

The Album as Art – BBC Radio 2. 10.30pm – 11.30pm
Radio 2’s season celebrating the record album continues with a look at the LP’s progression beyond its remit as a collection of singles and filler tracks. Spearheaded by the drugs-inspired Beatles output of the Mid-60s (Rubber Soul, Revolver etc), the format changed both in musical and visual content, with ever more elaborate and psychedelic album covers registering as iconic counterparts to the increasingly ambitious music. CDs changed everything in the mid-1980s. With input from Pete Townshend, David Bowie, Iggy Pop, Tony Visconti, David Gilmour, Noel Gallagher, Donovan, Peter Saville and many others.

The Professionals – ITV 4. 6.00pm – 7.00pm
A meeting at a high-security helicopter base is under threat.

Film: Junior Bonner (1972) – BBC 1. 11.30pm – 1.15am
Earthy drama starring Steve McQueen as a rodeo star who returns to his home town in Arizona to enter an annual contest and is shocked to find land developers on the site where his home once stood.

The Professionals – ITV 4. 8.00pm – 9.00am
CI5 investigates the shooting of a South American president’s son.

Show of the Week: Louis Armstrong – BBC 4. 10.10pm – 11.00pm
The jazz trumpeter and singer performs alongside the All-Stars during their British visit of 1968.