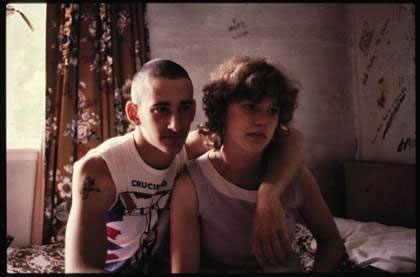 If you happen to be in the Carnaby Street area of London between 5th and 14th December, you might want to check out the Skins & Punks Pop-Up Exhibition.

The images on display are from the camera of Gavin Watson, natural day-to-day images shot between 1978 and 1985. According to the photographer: "Carnaby Street was probably the most important street in London for us out of town boys, we would save up and get the train down and head straight for Carnaby. In fact without Carnaby Street and shops like Sherrys, Merc and The Face , I don’t know if skinheads and mods would have lasted as long as they have. It is great for me to be back in Carnaby with this exhibition, to come full circle.”

The photos are also being gathered together in a book of the same name – and Gavin Watson will be signing copies of it at 1pm on Saturday 13th December at 3 Lowndes Court in the Newburgh Quarter of Carnaby, W1.

The Record Books Prints from The Rockpot