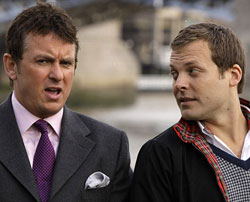 Barry Murphy returns once more trawl the TV and radio guides (so you don't have to) to find anything worth tuning into this week. All listings are for UK terrestrial TV, Freeview and national radio, with the shows running from Friday 30th January to Thursday 5th February 2009.

Five begins it's new series of Minder (Wednesday 4th – 9pm) this week. The famous drama series is reborn with wheeler-dealer Archie Daley (Shane Richie) following in the footsteps of his Uncle Arthur. In the first episode, Archie enlists the help of a taxi driver to settle a debt. BBC 4's Folk America season continues with the second part of Folk America (Friday 30th, 9pm), exploring the increasingly political edge adopted by folk music after the Depression and the emergence of artists Lead Belly, Woody Guthrie and Pete Seeger. This is followed by the Arena documentary on Woody Guthrie (Friday 30th, 10pm). Motown star Smokey Robinson gives an insight into his musical influences on Spectacle: Elvis Costello with Smokey Robinson (Channel 4. Wednesday 4th, 12.10am), while BBC 4 has a nostalgic look back at the country's first regional news programme in It's Time to Go Nationwide (Thursday 5th, 9pm)

On the Radio this week, music journalist Mark Paytress tracks down Prince Stash (or Prince Stanislaus Klossowski de Rola Baron de Watteville), a hip dandy at the centre of the London counter-culture scene – busted for drugs along with The Stones, friend of Pink Floyd and lover of Marianne Faithful and Nico in Stash: the Dandy Aesthete of Swinging London (Tuesday 3rd Feb, BBC Radio 4. 11.30am)

Folk America (2/3) – BBC 4. 9.00pm – 10.00pm
New. This Land is Your Land. Exploring the increasingly political edge adopted by folk music after the Depression and the emergence of artists Lead Belly, Woody Guthrie and Pete Seeger.

Arena: Rock Docs – Woody Guthrie – BBC 4. 11.00pm – 12.10am
Profile of the guitar player responsible for This Land is Your Land, who became a spokesperson for the migrant workers of California in the 1930s.

Film: McQ (1974) – Five. 6.25pm – 8.20pm
Thriller starring John Wayne. A maverick cop swears to bring his partner's killers to justice. However, he hasn't counted on a deadly conspiracy involving drugs and corruption within the police force.

Werner Herzog on the Culture Show – BBC 4. 10.00pm – 10.10pm
Interview with the German director, who becomes the first recipient of the BBC 4 World Cinema Achievement Award.

Film: Nosferatu, the Vampire (1979) – BBC 4. 10.10pm – 11.55pm
Werner Herzog's remake of the horror classic starring Klaus Kinski as Count Dracula. An estate agent tries to persuade the Count to buy a house in his home town. In German with subtitles.

Good Arrows – ITV 4. 11.00pm – 1.00am
New. One-off mockumentary set in the world of darts, co-written and directed by Irvine Welsh. Faded star Andy "the Arrows" Samson opens his doors to a filmmaker, letting slip a host of revealing and embarrassing secrets in the process. Starring Jonathan Owen and Katy Brand.

Style on Trial: the 1990s – BBC 4. 11.55pm – 12.55am
Stuart Maconie and Lauren Laverne put British style and fashion between the 1940s and the 1990s into the dock. They are joined in the studio by design specialist Ben de Lisi, singer and fashion broadcaster Mica Paris and musician, model and designer Pearl Lowe to discuss whether the 90s will be remembered as the golden age of celebrity, glamour and the triumph of the high street or as a bland, joyless decade in which the globalisation led to homogeneity of style.

Style on Trial: Finale – BBC 4. 12.55am – 2.25am
Stuart Maconie and Lauren Laverne's quest to identify Britain's most stylish decade ends with advocates putting the case for their favourite fashion era to an expert judging panel. Doing the honours are Laurence Llewelyn-Bowen for the 40s, Brix Smith-Start for the 50s, Jill Kennington for the 60s, Wayne Hemingway for the 70s, Caryn Franklin for the 80s and Ben de Lisi for the 90s.

Crying, Waiting, Hoping: the Story of Buddy Holly's Last Tour – BBC Radio 2. 7.00pm – 8.00pm
Three days before the 50th anniversary of the deaths of Buddy Holly, Ritchie Valens and The Big Bopper, Steve Harley tells the story of their US Winter Dance Party tour, during which their plane crashed. With Paul McCartney, George Harrison, Keith Richards, Don Everly, Carl Perkins, Little Richard and others. Plus new input from Tommy Allsup and Carl Bunch, the two surviving band members of the tour.

Film: On Her Majesty's Secret Service (1969) – ITV 1. 3.10pm – 5.45pm
George Lazenby's only outing as 007, and arguably the best film in the series. James Bond quits the Secret Service in a quest to track down the arch villain Blofield. A liaison with a beautiful playgirl leads him to a criminal who helps him track his quarry to a Swiss mountain hideaway.

Folk America (2/3) – BBC 4. 8.00pm – 9.00pm
This Land is Your Land. Exploring the increasingly political edge adopted by folk music after the Depression and the emergence of artists Lead Belly, Woody Guthrie and Pete Seeger.

The South Bank Show – ITV 1. 10.15pm – 11.15pm
Beyond the Footlights. The arts show returns with a look through the register of those students of the comedic arts who learnt their trade among the Footlights at Cambridge University. Stephen Fry, Griff Rhys Jones, John Fortune, Clive James and David Mitchell top the bill as pontificators on the influence of the Footlights on mainstream and alternative comedy. Plus a plethora of comic clips featuring alumni of this ultimate school of comedy. Presented by Melvyn Bragg.

Film: The Hitchhikers Guide to the Galaxy (2005) – BBC 2. 10.30pm – 12.10am
Big-budget adaption of Douglas Adam's cult sci-fi comedy, starring Martin Freeman. Everyman Arthur Dent's morning goes from bad to worse when he discovers that not only is his home due to be demolished to make way for a bypass, but that planet Earth itself is to be destroyed to make way for a hyperspace motorway.

Film: The Enigma of Kaspar Hauser (1974) – BBC 4. 11.00pm – 12.50am
Period drama based on a true story, directed by Werner Herzog. In 19th-century Germany, the inhabitants of a village are disturbed by the arrival of a youngster, who begins to display remarkable talents. Trivia note: Ian Curtis, the lead singer of the band Joy Division, reportedly committed suicide a few hours after watching the film. In German with subtitles.

Film: Monty Python's The Meaning of Life (1983) – ITV 1. 11.15pm – 1.20am
The Python team examines the trials and tribulations of human life in their usual irreverent comic style.

Film: Sid and Nancy (1986) – ITV 4. 12.05am – 2.05am
Biographical drama with Gary Oldman and Chloe Webb. New York, October 1978: police arrive at the Chelsea Hotel to find Sid Vicious of the Sex Pistols in a drug-induced stupor, holding a knife. Nearby lies Nancy Spungen, dead from stab wounds.

Film: Never Love a Stranger (1958) –
Film4. 1.00pm – 2.50pm
Unadventurous crime drama , following the life of an orphan and the events that change his life and lead him into a life of crime. Notable only for a young Steve McQueen in the starring role.

In Concert: Crosby and Nash – BBC 4. 8.30pm – 9.00pm
Featuring CSNY and solo songs such as Marrakesh Express and Guinnevere.

In Concert: Richie Havens – BBC 4. 11.15pm – 11.55pm
The American Folk season continues with a performance from the Brooklyn-based singer and guitarist.

The Story of Punk – ITV 4. 11.40pm – 1.45am
Excellent two part documentary, showing back-to-back tonight, tracing the story behind the musical movement, featuring interviews and archive footage of bands, including the Sex Pistols in concert.

Stash: the Dandy Aesthete of Swinging London – BBC Radio 4. 11.30am – 12Mid-day
Music journalist Mark Paytress tracks down Prince Stash (or Prince Stanislaus Klossowski de Rola Baron de Watteville), a hip dandy at the centre of the London counter-culture scene – busted for drugs along with The Stones, friend of Pink Floyd and lover of Marianne Faithful and Nico. But what happened to him after the 60s? Mark spends a week with the playboy, dandy, aristocrat, alchemist, scholar, vampire, feudal lord, musician and predator to unmask the real Stash.

The Hour the Music Died – BBC Radio 2. 10.30pm – 11.30pm
Fifty years to the day after the Iowa plane-crash deaths of rock 'n' rollers Buddy Holly, Ritchie Valens and The Big Bopper (aka Jiles Richardson Jr), Radio 2 presents a docudrama, directed by Dirk Maggs, speculating on what may have happened in the hour prior to the event.

Minder – ITV 4. 8.00pm – 9.00pm
Terry is pleased when an old friend returns to England, but soon learns there are old scores to be settled.

Minder – Five. 9.00pm – 10.00pm
New Series. The Famous drama series is reborn with wheeler-dealer Archie Daley following in the footsteps of his Uncle Arthur. In the first episode, Archie enlists the help of a taxi driver to settle a debt. Shane Richie stars.

Auf Wiedersehen, Pet – ITV 4. 9.00pm – 10.05pm
A spate of pilfering leads to fears that one of the lads may be a thief, which prompts Oz to find a novel way of catching the culprit.