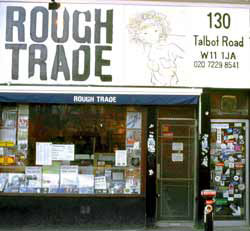 Barry Murphy returns once more trawl the TV and radio guides (so you don't have to) to find anything worth tuning into this week. All listings are for UK terrestrial TV, Freeview and national radio, with the shows running from Friday 13th March to Thursday 19th March 2009.

Since 1978, indie record label Rough Trade has been backing ground-breaking artists of every sensibility, from the post-punk girls who sound like they've been overheard singing to themselves at a bus stop, to the raw rock'n'roll of the Strokes and the Libertines. BBC 4 celebrates the independent shop/label/distributor in Do It Yourself: the Story of Rough Trade (Friday 13th, 9pm. Repeated Saturday 14th, 10pm & 2.30am). The story begins more than thirty years ago on 20th February 1976 when a young Cambridge graduate called Geoff Travis opened a new shop at 202 Kensington Park Road, just off Ladbroke Grove in West London. The Rough Trade shop sold obscure and challenging records by bands like American art-rockers Pere Ubu, offering an alternative to the middle-of-the-road rock music that dominated the music business.

In January 1977, when a record by Manchester punk band Buzzcocks appeared in the shop, Rough Trade found itself in the right place at the right time to make an impact far beyond that of a neighbourhood music store. When Spiral Scratch was released in 1977, the idea of putting out a single without the support of an established record company was incredible. But Rough Trade was to become the headquarters of a revolt against this corporate monopoly – it was stocking records by bands inspired by the idea that they could do it themselves.

A  new compilation of performances by bands who have recorded on the label Rough Trade at the BBC (Friday 13th, 10.30pm. Repeated Saturday 14th, 9pm & 1.25am) includes The Smiths, Robert Wyatt, Violent Femmes, Pulp and Anthony and the Johnsons.

Do It Yourself: the Story of Rough Trade – BBC 4. 9.00pm – 10.30pm
New. Profile of the famous independent label that grew out of a small record shop in West London opened by Cambridge graduate Geoff Travis in 1976.

Rough Trade at the BBC – BBC 4. 10.30pm – 11.30pm
New. Compilation of performances by bands who have recorded on the label, including The Smiths, Robert Wyatt, Violent Femmes, Pulp and Anthony and the Johnsons.

The New Avengers – BBC 4. 12.20am – 1.10am
Medium Rare. Steed is helped by a fake medium who suddenly discovers that her powers are real.

Minder (6/6) – Five. 7.35pm – 8.35pm
New series. Till Debt Do Us Part. Despite her infidelity, Archie's estranged wife takes the upper hand when she threatens to expose his dodgy dealings.

Rough Trade at the BBC – BBC 4. 9.00pm – 10.00pm (Repeated 1.25am)
Compilation of performances by bands who have recorded on the label, including The Smiths, Robert Wyatt, Violent Femmes, Pulp and Anthony and the Johnsons.

Do It Yourself: the Story of Rough Trade – BBC 4. 10.00pm – 11.30pm (Repeated 2.30am)
Profile of the famous independent label that grew out of a small record shop in West London opened by Cambridge graduate Geoff Travis in 1976.

Film: Ali (2001) – Channel 4. 11.10pm – 2.05am
Stylish biographical drama starring Will Smith in an Oscar-nominated role as legendary boxer Muhammad Ali. Michael Mann's film covers ten years in the fighter's life, from his first victory over Sonny Liston as the young Cassius Clay, to his conversion to Islam, his refusal to fight in Vietnam and his celebrated "Rumble in the Jungle" with George Foreman.

The Unseen Spike Milligan – More4. 11.35pm – 12.45am
An intimate insight into the life of the troubled comedy legend.

Film: The Eyes of Laura Mars (1978) – BBC 1. 11.55pm – 1.40am
Tense thriller starring Faye Dunaway and Tommy Lee Jones. A fashion photographer develops the uncanny and disturbing ability to foresee the deaths of those around her.

Hammer House of Horror – ITV 3. 11.50pm – 12.55am
A woman kills her attacker – but is he really dead? With Kathryn Leigh Scott and Simon MacCorkindale.

Mad Men (5/13) – BBC 2. 1.45am – 2.35am
Series two. The New Girl. Don finds himself caught in the middle of marital issues between TV comedian Jimmy and his wife Bobbie. Joan, meanwhile, gets engaged.

The Sweeney – ITV 4. 9.30pm – 10.30pm
Regan and Carter investigate a series of damning reports claiming police officers are not playing by the book.

Film: The Football Factory (2004) – Film4. 11.00pm – 12.45am
Unflinchingly violent, decently acted but morally ambiguous drama that examines soccer hooliganism through the lives of a firm of thugs who "support" Chelsea.

Film: Hud (1963) – Channel 4. 1.30am – 3.25am
Contemporary western starring Paul Newman. Hud is a moody, selfish son of Texas cattleman Homer Bannon. They are always at each others' throats. When their cattle are diagnosed with foot-and-mouth disease, the conflict between father and son comes to a head.

Lawrence Ferlinghetti – a Reluctant Beat -BBC Radio 4. 4.30pm – 5.00pm
Celebrating the life and work of the poet and publisher Lawrence Ferlinghetti, the elder statesman of San Francisco poetry. Ferlinghetti published Ginsberg's Howl, defended it through the obscenity trial that followed, while his A Coney Island of the Mind remains one of the bestselling books of poetry. In this exclusive interview to celebrate his 90th birthday, Ferlinghetti talks about why he doesn't consider himself to be a part of the Beat generation.

The Professionals – ITV 4. 8.00pm – 9.00pm
An Israeli minister is abducted and the ensuing suburban siege triggers an airborne pursuit as Bodie and Doyle try to save the day.

Jarvis Cocker's Musical Map of Sheffield – BBC Radio 2. 10.30pm – 11.30pm
Cocker waxes lyrical about his native Sheffield in this personal diary in which the Pulp frontman recalls growing up in a sad, once thriving city.

The Singles Story (2/4) – BBC Radio 2. 11.30pm – 12Midnight
New. David Quantick presents a series celebrating the 45rpm pop single, which RCA Victor launched 60 years ago and which, unlike the LP, established its pull with a relatively poor and hip youth market early on. Quantick continues his nostalgia trip with a look at the early days of the charts and the single's pull with teenagers, the impact of TV music shows and the cultural power of the 45, from early rock 'n' roll to the glam era, when Quantick hit his teen years.

Film: Kind Hearts and Coronets (1949) – Channel 4. 1.20pm – 3.25pm
Classic Ealing comedy starring Dennis Price and Alec Guinness. The distant heir to a dukedom sets out to murder all those who stand between him and the title.

The Sweeney – ITV 4. 6.55pm – 8.00pm
Regan assists a youth implicated in a brutal assault who is involved with a big-time mobster's wife.

Film: The Football Factory (2004) – Film4. 11.20pm – 1.05am
Unflinchingly violent, decently acted but morally ambiguous drama that examines soccer hooliganism through the lives of a firm of thugs who "support" Chelsea.

Film: Never Love a Stranger (1958) – Film4. 2.45pm – 4.35pm
Unadventurous crime drama , following the life of an orphan and the events that change his life and lead him into a life of crime. Notable only for a young Steve McQueen in the starring role.

Red Riding (3/3) – Channel 4. 9.00pm – 11.05pm
The trilogy reaches its conclusion in 1983 with Det Chief Supt Jobson being forced to recall the disappearance of Clare Keplay when another child goes missing in similar circumstances. Meanwhile, solicitor John Piggott is convinced the man imprisoned for Clare's murder is innocent.