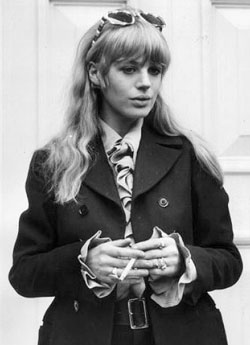 Barry Murphy returns once more trawl the TV and radio guides (so you don't have to) to find anything worth tuning into this week. All listings are for UK terrestrial TV, Freeview and national radio, with the shows running from Friday 24th April to Thursday 30th April 2009.

New drama Best – His Mother's Son (Sunday 26th. BBC 2. 9pm) looks at the family George Best left behind in Belfast during his rise to fame. At the same time as high-living was beginning to take its toll on George's career, this factual drama follows the descent of his mother into alcoholism and its effects on the whole family.

Finally, Marianne Faithfull has a night of programming dedicated to her, once again courtesy of BBC 4, on Monday 27th. Starting with her recent concert at LSO St luke's BBC Four Sessions: Marianne Faithfull (10pm), the night continues with a portrait of the singer/songwriter in Marianne Faithfull: Keeping the Faith (11pm) and the 2006 film Irina Palm (11.50pm).

BBC Four Sessions: Marianne Faithfull – BBC 4. 10.30pm – 11.30pm
New. The singer performs with her band at LSO St luke's, London. Includes covers of Easy Come, Easy Go and In Germany before the War as well as her first live rendition of the original 1960s arrangement of As Tears Gone By, and Sister Morphine, which was released by the singer before being popularised by The Rolling Stones.

Film: Fahrenheit 451 (1966) – ITV 1. 1.30am – 3.25am
Sci-fi drama directed by Francois Truffaut, starring Julie Christie and Oskar Werner. In an unspecified country, in an indeterminate future, readers are persecuted and the function of firemen is to burn books.

Laurence Llewelyn-Bowen's Men of Fashion (15/15) – BBC Radio 4. 3.45pm – 4.00pm
The Clothes We're in – the State of Men's Fashion now. In women's fashion the hemline acts as a social and economic barometer, going up and down in tune with the fortunes of the stock market. Laurence finds out what current men's fashion says about the state we're in.

Cilla – BBC 4. 10.30pm – 11.20pm
A vintage 1968 episode of Cilla Black's TV show. She sings Step Inside Love, For Once in My Life and Liverpool Lullaby. With musical guests Georgie Fame and Dusty Springfield.

The Sandie Shaw Supplement – BBC 4. 11.20pm – 11.45pm
Quicksand – The singer performs songs on the theme of travel as she visits a Welsh beach and Marylebone Station and sings classics such as Route 66 and Do You Know the Way to San Jose?

Lulu's Back in Town – BBC 4. 11.45pm – 12.10am
In edition of the Scottish singer's 1960s TV variety show, she performs Trolley Song, Suddenly You Love Me and Lulu's Back in Town. Also featuring the Everley Brothers and Les Dawson.

The Lyrics of Bob Dylan – BBC Radio 2. 10.00pm – 11.00pm
Laura Barton showcases the lyric skills of singer/songwriter Bob Dylan with analysis of ten of his songs by poets, critics and contemporaries, including poet laureate Andrew Morton and Greenwich Village contemporary Tom Paxton among others.

Best – His Mother's Son – BBC 2. 9.00pm – 10.30pm
Best – His Mother's Son – George Best had the world at his feet thanks to his amazing football ability. But the glamour-studded career of the famous winger was to destroy the life not only of Best himself, but also the family he left behind in Belfast. At the same time as high-living is beginning to take its toll on George's career, this factual drama follows the descent of his mother into alcoholism and its effects on the whole family.

The South Bank Show – ITV 1. 10.15pm – 11.15pm
William Goldman. A man who can lay claim to being the most successful and acclaimed screenwriter of the past four decades, Goldman holds court at home in New York City, where he began his writing career as a novelist, but quickly turned his hand to films. By the end of the 1970s he had some of Hollywood's most iconic movies to his name and won Oscars for Butch Cassidy and the Sundance Kid and All the President's Men. He then fell out of favour and wrote a searing Hollywood memoir. But then his star rose again due to his novel The Princess Bride. Melvyn Bragg presents.

Film: Rollerball (1975) – Five. 11.20pm – 1.40am
Futuristic action drama starring James Caan. In the 21st century, violence has been eliminated from society and people give vent to their feelings of aggression by watching a violent game called rollerball. Jonathan E is the reigning champion, but his popularity is causing the governing elite concern.

Ashes to Ashes (2/8) – BBC 1. 9.00pm – 10.00pm
Series Two. Gene is accused of causing death by dangerous driving when car thief Jed Wicklow is killed in a chase, but Alex is convinced something was wrong with Jed. The deceased was a Romany and hostilities run high on the camp when CID heavy-handedly try to unravel the details of his death.

Film: Irina Palm (2006) – BBC 4. 11.50pm – 1.25am
Blackly comic drama starring Marianne Faithfull. Maggie gets a job as a sex worker to raise money for her dying grandson. Although her secret life begins to empower her, she's terrified that her family will find out.

Mad Men (12/13) – BBC 4. 10.00pm – 10.45pm
Series Two. The Mountain King. Don catches up with an old friend; Joan introduces her fiance to the office staff; and Bertram, Alice and Roger meet to vote on the sale of Sterling Cooper.

The Thick of It: the Rise of the Nutters (2/2) – BBC 4. 10.45pm – 11.45pm
Malcolm Tucker's political career hangs in the balance when the prime minister's decision to resign six months early forces everyone to make friends with the Nutter faction.

Mad Men (12/13) – BBC 2. 12.30am – 1.20am
Series Two. The Mountain King. Don catches up with an old friend; Joan introduces her fiance to the office staff; and Bertram, Alice and Roger meet to vote on the sale of Sterling Cooper.

Film: The Hot Rock (1972) – Channel 4. 1.30pm – 3.25pm
Quirky crime caper directed by Peter Yates and starring Robert Redford and George Segal. Ex-convict John Dortmunder is invited by his criminal brother-in-law to participate in his plan to steal a priceless diamond from the Brooklyn Museum.

The New Avengers – BBC 4. 7.40pm – 8.30pm
Purdey is kidnapped and Allied attack plans are demanded as a ransom.

Flight of the Conchords Special: One Night Stand – BBC 4. 10.00pm – 10.30pm
Hilarious performance by the folk-singing duo, who present several of their popular musical parodies.