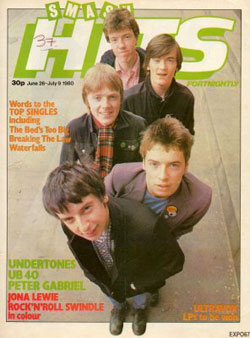 Barry Murphy returns once more trawl the TV and radio guides (so you don't have to) to find anything worth tuning into this week. All listings are for UK terrestrial TV, Freeview and national radio, with the shows running from Friday 15th May to Thursday 21st May 2009.

Hmmm, not much to report this week I'm afraid. BBC 4 continues it's fine tradition for Friday night music related documentaries with a two-part look at the history of Northern Irish rock and pop over the last four decades. So Hard to Beat (BBC 4. Friday 15th, 9.10pm) features exclusive interviews with Van Morrison, Snow Patrol, Gary Moore, Stiff Little Fingers, The Undertones and many more.

The recent Queens of British Pop programming is repeated late Sunday/Monday nights on BBC 4. Worth setting the recorder for if you didn't catch it the first time round, BBC 4 trawls the archives for classic episodes of shows featuring Dusty Springfield, Cilla Black (great legs chuck), Sandie Shaw, Lulu and Kate Bush.

On the radio this week, Nick Maes revisits and celebrates The Who's influential rock-opera Tommy, 40 years on in Happy Birthday Tommy Walker (Thurs 21st, BBC Radio 4. 11.30am). Featuring interviews with The Who's lead singer Roger Daltrey; Ken Russell, who directed the 1975 film version; Paul Nicholas, who appeared in the film as Cousin Kevin; and Michael Cerveris, star of the 1993 Broadway musical. The programme recalls Tommy in its various incarnations and considers its cultural and musical value and significance four decades on.

Never mind, there's a cracking James Brown documentary on the week after next. (Details in next weeks guide).

So Hard to Beat (1/2) – BBC 4. 9.10pm – 9.50pm
New. The first of a two-part documentary about Northern Ireland's rock music scene over the past 40 years, including interviews with Van Morrison and Snow Patrol. Part of the Ireland on Four season.

Flight of the Conchords: On Air – BBC 4. 11.55pm – 12.20am
How Bret McKenzie and Jemaine Clement took their cult show worldwide.

The New Avengers – BBC 4. 12.20am – 1.15am
Steed, Gambit and Purdey need to save the world from plunging into the third world war.

Film: The Warriors (1979) – ITV 4. 12.20am – 2.10am
Walter Hill's classic comic-book urban western, centring on a New York gang whose members battle their way back to home turf following the murder of a rival gang leader during a ceasefire meeting.

The Sweeney – ITV 4. 8.00pm – 9.00pm
Regan and Carter track down those responsible for stealing a trailer filled with Brandy.

Film: Carry On Cruising (1962) – ITV 3. 9.00pm – 10.50pm
Saucy comedy. The SS Happy Wanderer is all set for a Mediterranean cruise when the captain discovers his crew is made up of willing but not very able newcomers.

Film: Gregory's Girl (1980) – BBC 1. 10.50pm – 12.20am
Coming-of-age romantic comedy. Teenage footballer Gregory develops a crush on his school team's new player – an attractive blonde called Dorothy who transforms the side's fortunes. But Gregory struggles to make headway when he tries to get himself a date.

Queens of British Pop (1/2) – BBC 4. 12Midnight – 1.05am
Celebrating the female singers who have most influenced British pop music over the past 50 years, including Cilla Black, Sandie Shaw, Dusty Springfield, Suzi Quatro and Kate Bush.

Dusty – BBC 4. 1.05am – 1.30am
An episode of Dusty Springfield's TV series from 1967, featuring Tom Jones as a special guest and backing vocals by Madeline Bell, Lesley Duncan and Margaret Stredder.

Cilla – BBC 4. 1.30am – 2.10am
A vintage 1968 episode of Cilla Black's TV show. She sings Step Inside Love, For Once in My Life and Liverpool Lullaby. With musical guests Georgie Fame and Dusty Springfield.

The Sandie Shaw Supplement – BBC 4. 2.10am – 2.40am
Quicksand – The singer performs songs on the theme of travel as she visits a Welsh beach and Marylebone Station and sings classics such as Route 66 and Do You Know the Way to San Jose?

Lulu's Back in Town – BBC 4. 2.40am – 3.05am
In edition of the Scottish singer's 1960s TV variety show, she performs Trolley Song, Suddenly You Love Me and Lulu's Back in Town. Also featuring the Everley Brothers and Les Dawson.

Beyond a Joke – ITV 3. 9.00pm – 10.00pm
(3/5) How political correctness developed in comedies of the 20th century. Writers, actors and producters discuss the shift in values.

Ashes to Ashes (5/8) – BBC 1. 9.00pm – 10.00pm
Series Two. A burglary gives Gene the chance to save the Met's reputation, dented by reports of corruption, but, as it occurs at the home of Alex's future in-laws, she comes face to face with Molly's father.

Film: The Warriors (1979) – ITV 4. 10.00pm – 12Midnight
Walter Hill's classic comic-book urban western, centring on a New York gang whose members battle their way back to home turf following the murder of a rival gang leader during a ceasefire meeting.

Kate – BBC 4. 1.30am – 2.15am
Kate Bush's Christmas TV special from 1979. Featuring  Peter Gabriel performing "Here Comes The Flood" and in a duet with Kate on the Roy Harper song "Another Day."

The Professionals – ITV 4. 8.00pm – 9.00pm
Bodie's sanity is questioned when he becomes preoccupied with Hell's Angels.

Auf Wiedersehen, Pet – ITV 4. 9.00pm – 10.00pm
The boys are forced to take radical action to ensure they do not come out of the bridge deal penniless.

Film: The Black Windmill (1974) – ITV 4. 10.20pm – 12.30am
Spy thriller starring Michael Caine. While on a secret mission,
agent John Tarrant learns that his son has been kidnapped but is then suspected of treachery when the ransom is received.

Flight of the Conchords (2/10) – BBC 4. 10.30pm – 10.55pm
New. Series two. A New Cup. The purchase of a new cup leads to the duo's fortunes unravelling. Jemaine takes desperate measures to supplement their income, while their only fan tries to take advantage of the situation.

Make 'Em Laugh (1/6) – BBC 4. 11.30pm – 12.25am
New. Series chronicling over 100 years of American comedy, beginning with a look at the popularity of characters seen as a source of mirth, as portrayed by the likes of Harold Lloyd, Bob Hope, Woody Allen and Andy Kaufman.

The New Avengers – BBC 4. 7.40pm – 8.30pm
The team gets a clue about the identity of Russia's most effective spy, which leads them to Toronto.

Beyond a Joke – ITV 3. 9.00pm – 10.00pm
(3/5) How political correctness developed in comedies of the 20th century. Writers, actors and producters discuss the shift in values.

Happy Birthday Tommy Walker – BBC Radio 4. 11.30am – 12Mid-day
Celebrating the 40th anniversary of The Who's Tommy, one of the first rock operas. Nick Maes examines the album, which has been reinvented many times on stage and screen, with contributions from Ken Russell and Roger Daltrey.

Magnum P.I. on your mobile phone