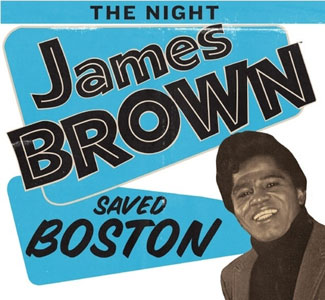 Barry Murphy returns once more trawl the TV and radio guides (so you don't have to) to find anything worth tuning into this week. All listings are for UK terrestrial TV, Freeview and national radio, with the shows running from Friday 22nd May to Thursday 28th May 2009.

April 5th 1968, the morning after one of the most catastrophic moments in American history – the assassination of Martin Luther King. America's inner cities had begun to implode and in Boston there is a fragile peace. The mayor of Boston is about to cancel a long-scheduled James Brown concert to avoid confrontation – a potentially incendiary move – but after warnings he has a change of heart and asks if there is 'something James Brown can do to help', by accident realising that by televising the concert they could keep people indoors that night and prevent widespread rioting.

The Night James Brown Saved Boston (BBC 4. Friday 22nd, 9.15pm. Repeated 1.15am & Saturday 23rd, 12.45am) tells the story of that amazing night and features rarely-seen footage of the Godfather of Soul's concert plus the personal recollections of James Browns band members, friends like activist Reverend Al Sharpton, personal manager Charles Bobbitt, Princeton University Professor Dr. Cornel West, Boston citizens, those who attended the concert, politicians (such as former Boston Mayor Kevin White) and Newsweek's David Gates. The Night James Brown Saved Boston tells the compelling story of an artist at the absolute peak of his powers using his artistry for the greater good.

The Night James Brown Saved Boston – BBC 4. 9.15pm – 10.30pm (Repeated 1.15am)
New. The night after the assassination of Dr. Martin Luther King, with America's inner cities bursting into flames, James Brown was scheduled to perform at the Boston Gardens. What happened there changed him forever. This documentary is an amazing look back at one heroic moment in James Brown's life as a performer, public figure and a man.

Flight of the Conchords: On Air – BBC 4. 11.30pm – 11.55pm
How Bret McKenzie and Jemaine Clement took their cult show worldwide.

Flight of the Conchords (2/10) – BBC 4. 11.55pm – 12.20am
Series two. A New Cup. The purchase of a new cup leads to the duo's fortunes unravelling. Jemaine takes desperate measures to supplement their income, while their only fan tries to take advantage of the situation.

The New Avengers – BBC 4. 12.20am – 1.15am
The Avengers may have discovered a clue to the identity of the USSR's most effective spy.

Film: Blues Brothers 2000 (1998) – ITV 1. 3.00pm – 5.20pm
Elwood looks for new band members after the loss of his brother Jake. Apparently conceived more as 'tribute' to the original rather than a sequel, once you can get past the absence of the late John Belushi, lack of plot and that 'bloody' kid, the music soundtrack at least has some redeeming features. Featuring a huge supporting cast of r 'n' b legends including James Brown, Aretha Franklin, Wilson Pickett, BB King, Eddie Floyd and Sam Moore.

True Stories: Thriller in Manila – More4. 10.00pm – 12Midnight
In 1975, in the Philippine capital Manila, Muhammad Ali and Joe Frazier fought their third and final match. Although they were previously friends, Ali's involvement in the Black Nation of Islam caused a rift.

Film: Beyond the Valley of the Dolls (1970) – Film4. 12.30am – 2.45am
Russ Meyer's wildly camp satire of the music industry. Female rock band the Carrie Nation try for success in Hollywood and become drawn into the hedonistic lifestyle.

The Night James Brown Saved Boston – BBC 4. 12.45am – 2.00am
The night after the assassination of Dr. Martin Luther King, with America's inner cities bursting into flames, James Brown was scheduled to perform at the Boston Gardens. What happened there changed him forever. This documentary is an amazing look back at one heroic moment in James Brown's life as a performer, public figure and a man.

R.E.S.P.E.C.T: the Art of Backing Vocals – BBC Radio 4. 10.30pm – 11.00pm
Nick Barraclough considers how backing vocals can transform a song, from the "doo be doos" of the 1950s to the innovations of The Beatles and the multitracked world of Joni Mitchell and The Carpenters.

Holiday on the Buses (1973) – ITV 1. 11.40am – 1.25pm
The third and last in the series of successful big screen spin offs from the popular 70s sitcom. Stan, Jack and Inspector Blake are fired from the bus depot. Finding work at a holiday camp, Stan and Jack are horrified to discover that their arch enemy Blakey, has also got a job there as head of security.

Beyond a Joke – ITV 3. 8.00pm – 9.00pm
How British sitcoms have reflected changing attitudes to political correctness.

On The Buses (1971) – ITV 3. 3.50pm – 5.30pm
Film version of the popular TV comedy series of the early 70s, starring Reg Varney. Stan Butler and the rest of the team at the bus depot feel threatened when women are brought in by the management.

Only Yesterday – the Carpenters Story – BBC 2. 7.00pm – 8.00pm
Documentary about the lives of the 1970s pop duo, whose wholesome brother-and-sister image hid a destructive secret. Includes behind-the-scenes footage and interviews with friends and family. Top 70's MOR for the Bank Holiday.

Film: Holiday on the Buses (1973) – ITV 3. 7.20pm – 9.00pm
The third and last in the series of successful big screen spin offs from the popular 70s sitcom. Stan, Jack and Inspector Blake are fired from the bus depot. Finding work at a holiday camp, Stan and Jack are horrified to discover that their arch enemy Blakey, has also got a job there as head of security.

Ashes to Ashes (6/8) – BBC 1. 9.00pm – 10.00pm
Series Two. Gene's determination to bring down ruthless loan shark Trevor Riley leads him towards dangerous ground after the corpse of Colin Mitchell is found floating in a canal. Mitchell, who worked for Riley, was reported missing by his wife and Alex
can't shake the feeling she is hiding something.

Film: Death Wish II (1981) – Five. 11.25pm – 1.05am
Squalid crime thriller starring Charles Bronson. Vigilante Paul Kersey has moved to Los Angeles to rebuild his life after the murder of his wife and the rape of his daughter. But his nightmare seems set to continue.

Film: Beneath the Planet of the Apes (1969) – Film4. 12.50am – 2.45am
The first sequel to Planet of the Apes starring James Franciscus and Charlton Heston. Deep underground in the forbidden zone, a community of mutant, telepathic humans worship a bomb.

Flight of the Conchords (3/10) – BBC 4. 10.30pm – 10.55pm
New. Series two. Bret forms a gang to protect himself from a group of rappers he insulted in a song, Murray is bullied by staff at the Australian consulate , and Mel paints a portrait of Jermaine.

The Deighton File – BBC Radio 4. 11.30am – 12Mid-day
Author Len Deighton, now aged 80, talks to Patrick Humphries, about his life and work, including his Harry Palmer spy stories, his accounts of Second World War combats and his experience in the kitchen with the Action Cook Book.

The Harlem Timeline (1/4) – BBC Radio 2. 10.30pm – 11.30pm
New. Soweto Kinch explores the musical heritage of the northern Manhattan district known as Harlem. The story continues with a look at the community's rich gospel tradition, and the successive thriving swing, bebop and R&B scenes.

Tourettes: I Swear I Can't Help It – BBC 1. 9.00pm – 10.00pm
In 1989 John Davidson featured in the QED documentary John's Not Mad, which famously raised awareness about the neurological condition Tourette syndrome. In 2002, John took part in a follow-up film alongside fellow sufferer Greg Storey. Now, seven years on, John and Greg are revisited to see how their worlds have changed.

Beyond a Joke – ITV 3. 11.05pm – 12.05am
Series looking at how British sitcoms have reflected what was happening in the UK during the 20th century.