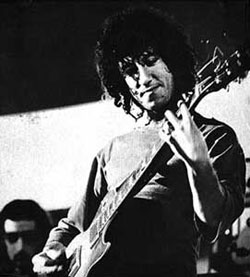 Barry Murphy returns once more trawl the TV and radio guides (so you don't have to) to find anything worth tuning into this week. All listings are for UK terrestrial TV, Freeview and national radio, with the shows running from Friday 8th May to Thursday 14th May 2009.

Legendary blues guitarist BB King named Peter Green as one of the greatest exponents of the blues, and the 'only guitar player to make me sweat'. The story of the blues performer who found fame in the 1960s as the lead guitarist of Fleetwood Mac, but left the public stage for years as he battled drug addiction and mental illness is told in the new documentary Peter Green – Man of the World (BBC 4. Friday 8th, 9.30pm – repeated 1.35am). Featuring archive performances and interviews with Carlos Santana, Noel Gallagher, founding members of Fleetwood Mac and Green himself, this film tells the story of one of blues rock's living legends.

New Zealand's fourth most popular guitar-based digi-bongo accapella-rap-funk-comedy folk duo the Flight of the Conchords are back with a second series starting on BBC 4 this week (Tuesday 12th, 10.30pm). Since his success managing the Crazy Doggs, Murray is in a big office downtown and doesn't have enough time to devote to the Conchords, so Bret and Jemaine fire him. But when they get a job doing the advertising jingle for Femident toothpaste they realise there were things Murray did behind the scenes.

On the radio this week, Francesco da Mosto celebrates the 40th anniversary of the release of The Italian Job and explores its enduring popularity in When Real Women Wore Minis and Real Men Drove Them (BBC Radio 4. Saturday 9th, 10.30am). He tracks down some of the real stars of this last hurrah of the Swinging Sixties and discovers some interesting behind-the-scenes secrets, including why scriptwriter Troy Kennedy Martin chose Turin for the main location.

Also, what was it really like to drive one of the Mini Coopers in the famous car chase through the city, into the sewers and, ultimately, the death-defying leap across a 60ft gap between buildings? Producer Michael Deeley reveals what was behind the choice of the film's ending, and the several alternative versions which have provided numerous theories over the years.

Peter Green – Man of the World – BBC 4. 9.30pm – 11.00pm (Repeated 1.35am)
New. The story of the blues performer who found fame in the 1960s as the lead guitarist of Fleetwood Mac, but left the public stage for years as he battled drug addiction and mental illness. Featuring archive footage and interviews with Noel Gallagher, Carlos Santana, his former bandmates and the musician himself.

Flight of the Conchords (11&12/12) – BBC 4. 11.45pm – 12.40am
Series One. Jemaine and Bret cheers up Murray by convincing him he's a good manager – but he responds by blowing all his money on a video shoot. Murray hires a bongo player to join the duo – a move that does not go down well with Jermaine and Bret.

Film: Carry on Cowboy (1965) – ITV 1. 1.20pm – 3.05pm
One of the weaker comedies in the classic British series starring Sid James. There's pandemonium in Stodge City when the Rumpo Kid rides into town, followed soon after by a sanitary engineer looking for work.

Ford's Dagenham Dream – BBC 4. 7.00pm – 8.00pm
British driver's love affair with the US-designed cars that were manufactured at Ford's Dagenham factory in the 1960s and 70s, including the Zephyr, Cortina and Capri.

Film: Dracula – Prince of Darkness (1965) – ITV 4. 11.50pm – 1.30am
Hammer horror starring Christopher Lee. A group of tourists are left stranded in the home of Count Dracula, who has been supposedly dead for ten years.

Mad Men (13/13) – BBC 2. 1.35am – 2.25am
Series Two. Meditations in an Emergency. Betty finds out that she is pregnant but insists that now is not the right time, and Duck outlines his vision of the company.

When Real Women Wore Minis and Real Men Drove Them – BBC Radio 4. 10.30am – 11.00am
Francesco da Mosta "blows the bloody doors off" The Italian Job, to mark the 40th anniversary of the film's release in 1969. He tracks down some of the stars of this last hurrah of the Swinging Sixties and discovers some interesting secrets, such as why scriptwriter Troy Kennedy Martin chose Turin for the main location.

On The Buses (1971) – ITV 1. 11.40am – 1.30pm
Film version of the popular TV comedy series of the early 70s, starring Reg Varney. Stan Butler and the rest of the team at the bus depot feel threatened when women are brought in by the management.

Film: Carry on Dick (1974) – Film4. 5.15pm – 7.00pm
Saucy comedy starring Sid James. In Georgian England all travellers are fair game to highwayman Dick Turpin. The Bow Street runners are at their wits end: little do they know that Dick has the most ingenious of disguises.

Film: Carry On at Your Convenience (1971) – BBC 2. 6.05pm – 7.30pm
Comedy starring Sid James, Kenneth Williams and Charles Hawtrey. A slapstick series of catastrophes ensues when workers at a factory go on strike.

Blues Britannia: Can White Men Play the Blues? – BBC 4. 9.30pm – 11.00pm (Repeated 2.00am)
Documentary charting the British love of the musical genre over a 20-year period from the 1950s. Contributors including Keith Richards, Paul Jones, John  Mayall and Bill Wyman study the inspiration of American artists such as Muddy Waters, how young white audiences came to love the music, and the increasing international dominance of UK-based performers as the 1970s dawned.

Blues at the BBC – BBC 4. 12Midnight – 1.00am
Archive footage of blues performances from the past 50 years. Featuring famous songs by Son House, The Kinks, BB King, John Lee Hooker and Eric Clapton, plus lesser known tracks by Freddie King, Delaney and Bonnie and Long John Baldrey.

Blues on Later… with Jools Holland – BBC 4. 1.00am – 2.00am
Performances by many of the greatest blues artists that have appeared on the music variety show, including BB King, Bo Diddley, Eric Clapton and Seasick Steve.

Ashes to Ashes (4/8) – BBC 1. 9.00pm – 10.00pm
Series Two. Manchester journalist Jackie Queen, a blast from Gene's past, turns up at CID announcing she's pregnant with Gene's baby. She's also investigating the disappearance of northern teenagers that have run away to London and wants help tracking down one in particular, her niece Rachel.

Minder – ITV 4. 8.00pm – 9.00pm
Arthur causes a diplomatic incident by trying to strike a deal with a Russian ship.

Film: The Van (1996) – BBC 4. 10.00pm – 11.35pm
Gritty comedy drama, based on the Roddy Boyle novel, starring Colm Meaney. When Bimbo loses his job, he decides to invest his redundancy money in a mobile fast-food business. With help from his friend Larry, "Bimbo's Burgers" begins trading, hoping to cash in on the euphoria surrounding Ireland's 1990 World Cup campaign.

Network releases The Prisoner The Complete Series on Blu-ray 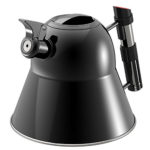 Brewing up with the Star Wars Darth Vader kettle