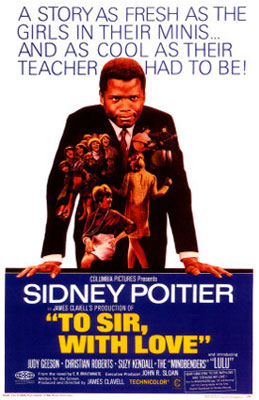 Barry Murphy returns once more to trawl the TV and radio guides (so you don't have to), finding anything worth tuning into this week. All listings are for UK terrestrial TV, Freeview and national radio, with the shows running from Friday 28th August to Thursday 3rd September 2009.

While the summer months are slow for new programmes to recommend, there are at least a few films over the next seven days that are worth a glance, no matter how many times you may have seen them in the past.

Cinema's first African American superstar Sidney Poitier was an actor who consciously defied racial stereotyping. Handsome and unassuming, he brought dignity to the portrayal of noble and intelligent characters. His roles in Guess Who's Coming to Dinner (BBC 2. Sunday 30th, 1.15pm) and To Sir, with Love (Five. Saturday 29th, 2.10pm) were for their time -1967 – landmarks in the breaking down of social barriers between blacks and whites, and Poitier's talent, conscience, integrity, and inherent likability placed him on equal footing with the white stars of the day. In To Sir… Poitier plays Mark Thackeray, who begins a new teaching position at a tough London high school, and slowly wins the trust and respect of a class of undisciplined students including Judy Geeson and Lulu, who sings the memorable title theme.

Another British film made in the 'swinging sixties', Every Day's a Holiday (BBC 2. Wednesday 2nd, 11.00am) is an often laughably bad 'vehicle' for chart toppers Freddie and the Dreamers. Its plot, such as there is one, about teenagers competing in a talent show at a seaside resort is incidental. The real interest here is in the period detail and the addition of beat group The Mojos. Finally, Robbery (ITV 1. Friday 28th, 12.30am) is a 1967 British heist movie, clearly inspired by the Great Train Robbery. Directed by Peter Yates, who later went on to make Bullitt, the high-point is a terrific car chase through sixties London.

Film: A Kid for Two Farthings (1955) – Film4. 1.25pm – 3.10pm
An imaginative young boy growing up in London's impoverished East End in the 1950s, absorbs a tale about the magical power of captured unicorns from the kindly tailor Kandinsky and goes in search of the mythic beast.

Film: Please Sir! (1971) – Channel 4. 1.25pm – 3.25pm
Spin-off from the TV sitcom. When the pupils from Fenn Street School get the chance to go on a trip to the countryside, Bernard Hedges (John Alderton) makes sure his class is included despite his colleagues' disapproval. Classic British romp featuring Duffy, Frankie Abbott, Maureen & the gang. With a groovy theme song from Cilla.

Island at the BBC – BBC 4. 9.35pm – 10.35pm
Archive performances by artists associated with the Island record label during its 50 years. Tracks include Cat Stevens's Father and Son, Roxy Music's Do the Strand and Bob Marley and the Wailers' Stir It Up. The programme also features Steel Pulse, U2, PJ Harvey, Amy Winehouse and Baaba Maal.

Keep On Running: 50 Years of Island Records – BBC 4. 10.35pm – 12.05am
Celebrating half a century of the Jamaican record label foundered by Chris Blackwell, which brought reggae to wider attention and propelled performers such as Bob Marley to global superstardom. Contributors include Grace Jones, Amy Winehouse, PJ Harvey, Paul Weller and Yusuf Islam, while the story is told using archive news and performance footage.

Film: Lost Horizon (1973) – Five. 11.30am – 2.10pm
Bizarre early 70s musical remake starring Peter Finch with a score by Burt Bacharach and Hal David . A plane carrying a group of evacuees from a revolution in Southern Asia crash-lands in the Himalayas. Voted one of the top fifty worst films of all time.

Film: To Sir, with Love (1967) – Five. 2.10pm – 4.25pm
Drama starring Sidney Poitier, with Judy Geeson, Lulu and The Mindbenders. Mark Thackeray, an engineer from Guyana, takes a job as a schoolteacher in London where the pupils are rough and unruly. He attempts to win their respect and interest by practising unconventional methods.

Seasick Steve: Bringing it All Back Home – BBC 4. 7.30pm – 8.00pm
Documentary following the US musician to Mississippi and Tennessee. Part of Folk America night.

Folk America (2/3) – BBC 4. 9.00pm – 10.00pm
This Land is Your Land. Exploring the increasingly political edge adopted by folk music after the Depression and the emergence of artists Leadbelly, Woody Guthrie and Pete Seeger.

Folk America (3/3) – BBC 4. 10.00pm – 11.00pm
How the genre became the domain of the more commercial acts in the late 1950s before Bob Dylan and Joan Baez restored its reputation as a force for political change.

Odetta Remembers – BBC 4. 11.00pm – 11.30pm
Tribute to the guitarist, singer and civil rights campaigner Odetta who was labelled the "Queen of Folk" by Martin Luther King and died at the age of 77 in December 2008. Featuring an intimate interview with the artist and concert footage from throughout her career.

Later… Folk America – BBC 4. 12.30am – 1.30am
A compilation of performances by Norah Jones, Johnny Cash and Emmylou Harris.

Bigger Than Jesus – BBC Radio 2. 11.00pm – 12Midnight
A 2005 programme recalling a critical moment in the history of popular culture when on 4th March 1966 London's Evening Standard published an interview in which John Lennon stated that for the era's youth The Beatles had overtaken Jesus in popularity.

Film: Guess Who's Coming to Dinner (1967) – BBC 2. 1.15pm – 3.00pm
Comedy drama starring Spencer Tracy, Katharine Hepburn and Sidney Poitier. A publisher and his patrician wife are taken aback when their daughter announces her engagement to a black doctor.

The Unforgettable… Kenny Everett – ITV 1. 2.00pm – 2.30pm
A tribute to the irrepressible pirate DJ who became one of Britain;s most outrageous, original and influential TV entertainers.

The Professionals – ITV 3. 7.00pm – 8.00pm
CI5 is assigned to protect an Arab diplomat who is being pursued by assassins.

The Sweeney – ITV 3. 8.00pm – 9.00pm
A villain attempts to retrieve stolen loot and only Regan and Carter can stop him.

Island at the BBC – BBC 4. 11.00pm – 12Midnight
Archive performances by artists associated with the Island record label during its 50 years. Tracks include Cat Stevens's Father and Son, Roxy Music's Do the Strand and Bob Marley and the Wailers' Stir It Up. The programme also features Steel Pulse, U2, PJ Harvey, Amy Winehouse and Baaba Maal.

Keep On Running: 50 Years of Island Records – BBC 4. 12Midnight – 1.30am
Celebrating half a ce
ntury of the Jamaican record label foundered by Chris Blackwell, which brought reggae to wider attention and propelled performers such as Bob Marley to global superstardom. Contributors include Grace Jones, Amy Winehouse, PJ Harvey, Paul Weller and Yusuf Islam, while the story is told using archive news and performance footage.

The Beatles at the Beeb – BBC Radio 2. 12.00pm – 2.00pm
Bill Kenwright with 1960s Beatles music and interviews from the BBC archives, including a not-heard-since-1965 Pop Inn radio show interview regarding the movie Help! and the "lost" master tape of The Lennon and McCartney Songbook, which last aired in August 1966.

Who Do You Think You Are? – BBC 2. 7.00pm – 8.00pm
Delving into the paternal side of his family history, actor and mod with a small 'm' Matin Freeman wants to find out if his grandfather was really shot while making a cup of tea at Dunkirk. Further back, Martin discovers that six of his great-grandparents' 12 offspring died young.

Les Paul – Chasing Sound – BBC 4. 10.00pm – 11.30pm
The rags-to-riches life story of the late jazz guitarist and father of the solid-body electric guitar, narrated to a soundtrack of his greatest hits.

Twice Ken is Plenty: the Lost Script of Kenneth Williams – BBC Radio 4. 11.30am – 12Mid-day
A recently unearthed script written for Kenneth Horne and Kenneth Williams in 1966 is given its first radio performance before an audience by Robin Sebastian as Williams and Jonathan Rigby as Horne, with Charles Armstrong as the Announcer. Introduced by the script's finder Wes Butters.

Film: Every Day's a Holiday (1964) – BBC 2. 11.00am – 12.30pm
Musical comedy starring Freddie and the Dreamers and featuring The Mojos. A group of young workers in a holiday camp seek fame and fortune via a talent contest.