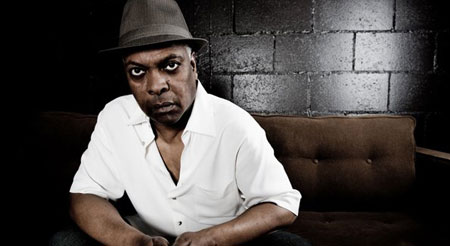 Barry Murphy returns once more to trawl the TV and radio guides (so you don't have to), finding anything worth tuning into this week. All listings are for UK terrestrial TV, Freeview and national radio, with the shows running from Friday 11th September to Thursday 17th September 2009.

Hammond B3 organ alchemist Booker T Jones demonstrates why he is considered one of America's most prolific, distinguished and instantly-recognisable musical forces on Cambridge Folk Festival (BBC 4, Mon 14th, 7.30pm). Accompanied by a rocking band which includes members of the Fabulous Thunderbirds, Booker T's resulting vibrant and powerful sound delights the Cambridge crowd. Classics such as Green Onions are performed alongside tracks with a new twist, like Hip Hug Her which features a rap from drummer Darian Gray.

"There is a fifth dimension beyond that which is known to man." Fifty years ago, writer Rod Serling ushered TV audiences into a new realm of light and shadow – The Twilight Zone – offering glimpses of American dreams and nightmares through a glass darkly. In this weeks radio highlight, You're Entering the Twilight Zone (BBC Radio 4. Tues 15th, 11.30am), Alan Dein explores the life of this provocative screenwriter and producer.

…Sings The Beatles – BBC 4. 9.30pm – 10.30pm (Repeated 12.30am)
New. A look back through the BBC's archives at memorable covers of classic Beatles songs. Included are a performance of Day Tripper by Sandie Shaw, The Carpenters' rendition of Help!, the reinvention of I Am the Walrus by Oasis and Joe Cocker's chart-topping interpretation of With a Little Help From my Friends. Plus Paul McCartney's solo performance of Lady Madonna.

The Beatles: on Record – BBC 4. 10.30pm – 11.30pm
This documentary, featuring rare footage and musical out-takes, charts the musical development of The Beatles at Abbey Road Studios from their first single, Please Please Me in 1962 to the LP Abbey Road in 1969. Narrated entirely by John Lennon, Paul McCartney, George Harrison, Ringo Starr and their producer George Martin, the film looks at how their innovative use of recording techniques, instrumentation and song structures contributed to a hugely successful body of work.

How The Beatles Rocked the Kremlin: Storyville – BBC 4. 1.30am – 2.30am
Examining how the band's music may have contributed towards the fall of the Soviet Union, and the influence The Beatles had on changing the views of many who lived there.

Film: Vault of Horror (1973) – Film4. 1.20am – 3.10am
Terry-Thomas and Denholm Elliott star in this very enjoyable Amicus anthology horror from director Roy Ward Baker. In a large building, five men get into a lift heading for the ground floor, but instead it takes them to the sub-basement where they find themselves trapped and share visions with each other of their demise.

Tweed Yarns (1/3) – BBC 4. 8.00pm – 9.00pm
Trouble Looms. Documentary series examining the rise in popularity of Harris Tweed, beginning with how an English entrepreneur hoped to revolutionise the way the fabric was made.

Holloway Dreams: the Joe Meek Story (1/3) – BBC Radio 2. 11.30pm – 12Midnight
Another chance to hear a 2007 tribute to studio pioneer Joe Meek, who manufactured futuristic sounds, most famously the Tornado's 1962 number one instrumental Telstar. Other beneficiaries of the Meek touch include Screaming Lord Sutch and the Savages, Billy Fury, Gene Vincent, The Honeycombs and Petula Clark. But Meek led a life troubled by depression and the then illegality of homosexuality. On 3 February 1967 – the eighth anniversary of his hero Buddy Holly's death – Meek fatally shot both his landlady and himself. Presented by Tom Robinson.

Tweed Yarns (2/3) – BBC 4. 9.00pm – 10.00pm
New series. Harrassed Tweed. Brian Haggas orders his mill to stop producing tweed until the thousands of jackets already produced have been sold and when buyers prove scarce, the textile boss is forced to lay off his freelance weavers. Elsewhere, Shawbost Mill aks a young Scottish designer to dream up tweed in Mediterranean hues, and Carloway Mills takes an interest in making car seat covers.

You're Entering the Twilight Zone – BBC Radio 4. 11.30am – 12 Mid-day
"There is a fifth dimension beyond that which is known to man." Fifty years ago, writer Rod Serling ushered TV audiences into a new realm of light and shadow – The Twilight Zone – offering glimpses of American dreams and nightmares through a glass darkly. Alan Dein explores the life of this provocative screenwriter and producer.

Film: Gregory's Girl (1980) – BBC 4. 10.00pm – 11.30pm
Coming-of-age romantic comedy. Teenage footballer Gregory develops a crush on his school team's new player – an attractive blonde called Dorothy who transforms the side's fortunes. But Gregory struggles to make headway when he tries to get himself a date.

Film: Enter the Dragon (1973) – ITV 4. 11.30pm – 1.40am
Classic, bone-shattering martial arts adventure starring Bruce Lee. A master of martial arts is enlisted by British intelligence to help put an end to the traffic in opium and prostitutes organised from an island fortress by a criminal mastermind.