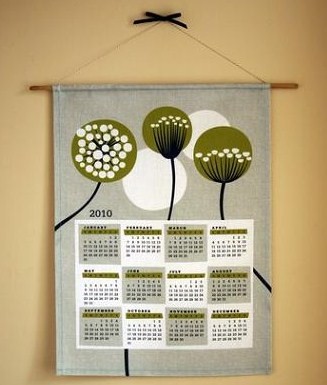 You may remember Cicada Studio's Queen's Anne Lace fabric that we featured earlier this year, with its 1950s-style, naturally inspired design. Well, having grown up in a house where we dried the pots up with tea towels that were printed from every year from approximately 1970 to 1987, I was overjoyed to see that they've adapted the design into a 2010 tea towel wall hanging.

The tea towel is printed with a calendar for the new year and is sent with its own rod and twine for display purposes. And it's handy to know that when the year runs out, there'll be another attractive tea towel in the cupboard and a heirloom in the making!

The tea towel costs $42, plus the shipping fees from the United States.